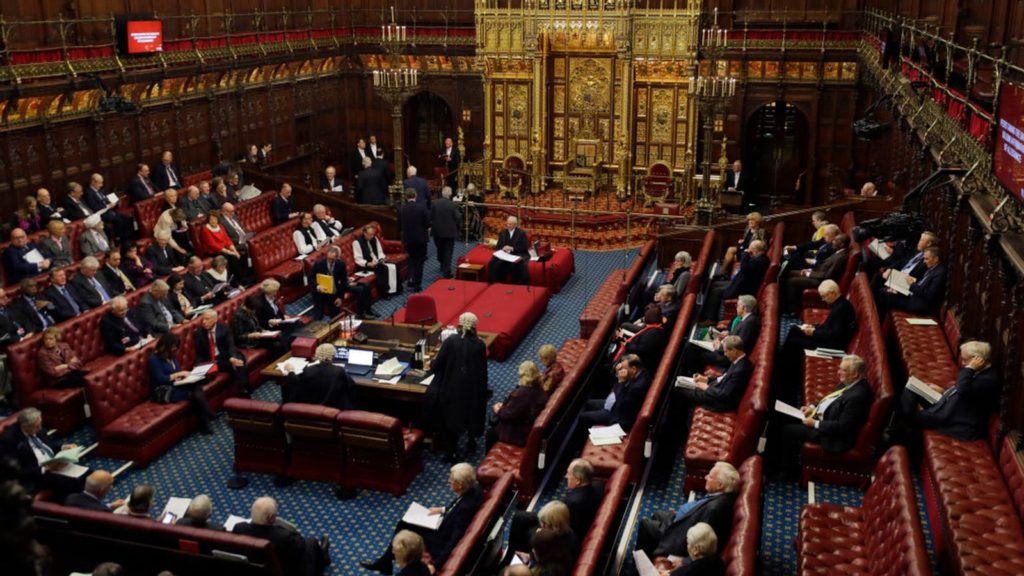 The latest from the House of Lords as peers vote on the UK Internal Market Bill with the government facing defeat.

The government is expected to face a heavy defeat in a vote on the bill, which is scheduled for 7pm. A minister has vowed the any parts of the bill removed by the Lords will be reinstated despite the internal Market Bill breaking international law, Downing Street insists it is a “vital safety net”.

Archbishop of Canterbury adds to criticism

The head of the Church of England adds his voice to concerns over the impact of the bill on peace in Northern Ireland.

The process of peace and reconciliation in Northern Ireland, as Lord Eames said, did not end with the Belfast Agreement,” he says.

It remains an ongoing process which requires work and awareness from leaders.

Indeed, he says there is little disagreement about the bill, specifically on the fact it breaks the law.

“If we can’t take a view on a matter of deliberate law breaking by the government, we may as well pack up our bags and go home, ” he says.

Lord Howard is not holding back here.

“What sort of a precedent is the government setting when it admits that position?

“How can we reproach other countries – Russia, China, Iran – if their behavior becomes reprehensible if we ourselves have such scant regard for treaties we sign up to.”

He begins by paying tribute to Lord Eames’ “moving” words, saying they “carry great weight and merit serious consideration by the government”.

He says he resisted the temptation to repeat his (critical) speech on the bill from its second reading – but says the temptation was a “seductive one” because “to use a much-maligned phrase, nothing has changed” .

A hat-tip, of course, to another former Conservative leader, Theresa May.

Lord Eames, former Archbishop of Armagh, is similarly scathing of the legislation.

“As the Bill stands, there is potential for unintended consequence to the sensitivities of community peace and harmony in Northern Ireland,” he says.

“Brexit is already asking searching questions of that sensitivity.”

Describing peace in the nation “still a tender plant”, he adds: “Constantly lurking in the background is the threat of violence and terrorism.”

He has tabled an amendment which would require the Secretary of State to publish a statement on the impact that the bill is likely to have on the process of peace and reconciliation in Northern Ireland.

Lord Judge says he believes only Northern Ireland has Part 5 clauses so as to allow the government to “nullify its obligations” in the EU withdrawal agreements.

Crossbench peer Lord Judge says enactment of part five of the Bill would undermine the rule of law and damage our international reputation.

He says he intends to divide the house – or request votes – on every single clause of the Bill “so as to record the overwhelming view of the House that we are not content”.

The speaker had said it would begin at 5.02pm, but more observant readers will notice that was not the case.

The Internal Markets Bill committee stage will begin at 5.02pm.

Ahead of the debate, the Lords has been the subject of focus after Lord Kilclooney was accused of racism for describing US vice president-elect Kamala Harris solely as “the Indian”.

The former Ulster Unionist Party (UUP) deputy leader, John Taylor, was ordered to apologize and retract his tweet about Ms. Harris, who has become the first black and Asian-American person to be elected to the role.

The crossbench peer, who previously deleted a tweet describing then-Irish taoiseach Leo Varadkar as a “typical Indian”, insisted there was “nothing racist” in his latest post.

Ms. Harris, a senator from California, also made history as the first woman to be elected vice president when voters chose her and Joe Biden to replace Donald Trump in the White House.

But Lord Kilclooney tweeted: “What happens if Biden moves on and the Indian becomes President. Who then becomes Vice President?”

The Lord Speaker, Lord Fowler, said the peer “should retract and apologize” after senior politicians said they would lodge complaints.

“This is an offensive way to refer to anyone, let alone a woman who has just made history. The comment is entirely unacceptable and has no place in British politics. I could not be clearer,” Lord Fowler added.

Conservative MP Simon Hoare, who is chairman of the Commons Northern Ireland affairs select committee, said the message was “Bad. Rude. Racist. Appalling” and that he had submitted a formal complaint to the Lord Speaker’s office.

Meanwhile, Labor’s leader in the Lords, Baroness Smith, added: “I am so angry about this comment. It is despicable and beneath contempt, and totally unacceptable from anyone – but especially from someone in Parliament.”

“The first thing is to get it in perspective, the criticism is minor, the support is massive – I’ve never had so many Twitter followers in one day, ever,” he said.

“I’m very fond of India myself, I’m a member of the British India all-party group, I have two Indians (tenants) in my flats here in London and there’s nothing racist in it whatsoever.

He later withdrew the remark.

While the debate was due to begin at around 4pm, peers are currently still considering Commons amendments and reasons on the Agriculture Bill.

Ahead of the debate, a cabinet minister said the government would reinstate any parts of the legislation that are removed by the House of Lords

The UK Internal Market Bill, which breaks international law and has been condemned by critics both in Westminster and abroad, seeks to allow ministers to override the Withdrawal Agreement signed with the EU.

It is expected to suffer a heavy defeat in the House of Lords as peers consider the most controversial parts of the bill.

Labour has warned the UK could become an “international pariah” if the bill is passed in full.

And a fresh parliamentary row over the legislation is likely to again be closely watched in the US, where president-elect Joe Biden has previously warned about Northern Ireland’s Good Friday Agreement becoming a “casualty” of Brexit.

Follow the latest updates from Sky’s political editor Jon Craig in Westminster and reaction from elsewhere as peers discuss the controversial Brexit legislation.