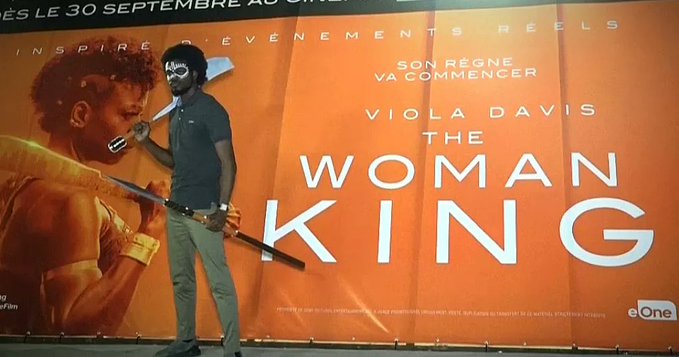 2022 was an eventful year for culture in Africa. From cinema to architecture and music, let’s shine the light on some of the most significant pieces of news in the world of art and culture of the past year.

The ribbon was cut and “The Amazon” was unveiled in Cotonou. Covered in bronze with an overall height of 30-meter the eponymous statue was inaugurated in the Beninese capital. The monument pays tribute to the women fighters known as Agoodjié. Until the end of the 19th century, they belonged to the elite corps of the royal army of Dahomey, a kingdom located in the south of the country.

Centuries later, their reputation precedes them. The American movie “The Woman King”, was freely inspired by their story.

Many viewers in Benin praised the film as well as the African American Film Critics Association.

The “Black Panther Wakanda Forever” cast travelled to Lagos, Nigeria for the African premiere of the blockbuster.

The film takes up the story of the Wakanda Kingdom which is grieving its king. Disney called several artists from the continent to produce music for the movie’s soundtrack. African singers include artists from South Africa. Ghana is represented by Ammarae, and Nigeria has the most singers featured; with big names such as Burna Boy and Tems.

Far from Hollywood, African cinema is alive and kicking. The Carthage Film Festival, one of the oldest festivals of its kind still active on the continent, celebrated 56 years of existence. Among the award-winning fiction and documentary films was “Sous les Figues” or Under the Figs by French-Tunisian filmmaker Erige Sehiri. The movie had already won awards at the Francophone Film Festival in Namur (Belgium) and during the Quinzaine des réalisateurs in Cannes.

Among the African music giants who passed away in 2022 was Senegalese percussionist and singer Rudy Gomis. The founding member of the group Orchestra Baobab passed away on April 27 aged 75.

In Nigeria, the news of the death of gospel singer Osinachi Nwachukwu at the age of 42 plunged millions into grief. It also shed the light on the plight of domestic violence. Indeed, during the trial of Nwachukwu’s husband some of her relatives claimed that she died as a result of violence from her partner.

School and clay infrastructures are Diébédo Francis Kéré’s trademark. The architect from Burkina Faso is renowned for his sustainable constructions in the service of the population. He became the first African to be awarded the highest distinction in the occupation, the Pritzker Prize. Following the announcement, the laureate was keen to pray tribute to the talent of the African youth. He also travelled back to his mother country to celebrate his feast.

UNESCO has enriched its intangible cultural heritage list by featuring additional African traditions and music. Among them are the Algerian Raï, a song full of emotion and poetry; the Kalela dance from Zambia which is traditionally performed during funerals or harvest festivals. Harissa, a spicy paste dear to Tunisians also stood out to represent Africa’s cuisine.

When some make first appearances, others make a comeback. After 45 years of censorship, Kenya’s most famous play “Ngaahika Ndeenda” translated as (“I will marry when I want”) was performed once again. The work highlights the exploitation of ordinary citizens by the political and economic elite.

The play displeased the authorities in 1977 and was banned. Its authors Ngugi wa Thiong’o and Ngugi wa Mirii were even imprisoned.

The Dakar Biennial returned to its audience after a postponement in 2020. On the program, the best of Africa’s contemporary artistic creation and more than 2,500 artists. Tegene Kunbi Senbeto, an Ethiopian abstract artist won the Grand Prix of the event.

South African DJ Black Coffee returned from Las Vegas with a head full of memories and a suitcase containing his very first Grammy. He became the first African to collect the Grammy award for best dance/electronic album.