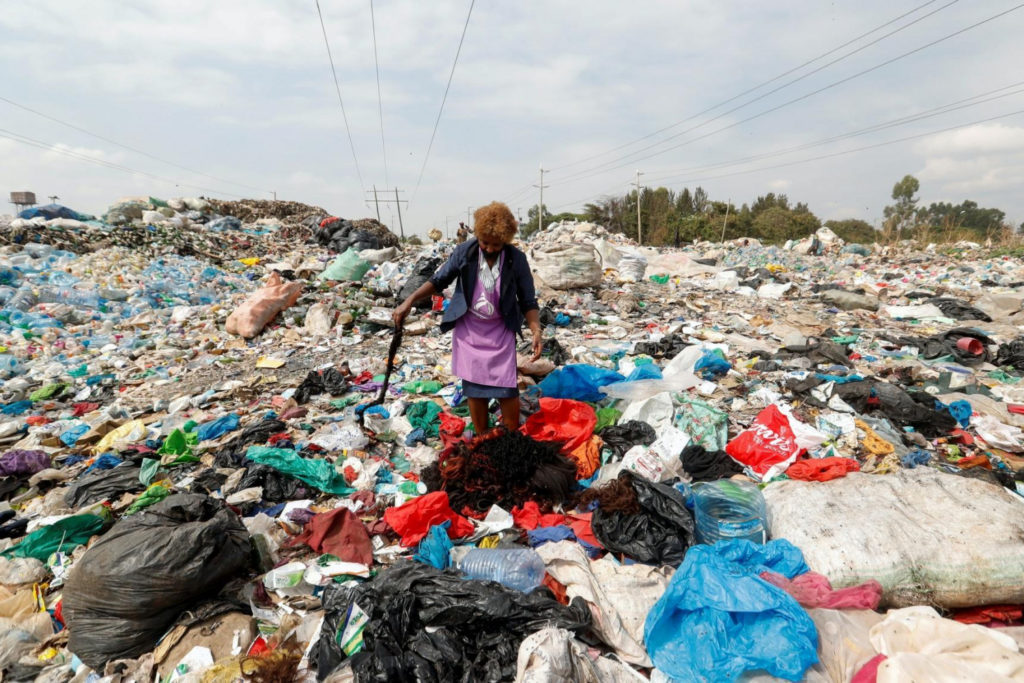 It’s always heaving with people on the lookout for a bargain, Western brand names which are recycled and sold at a fraction of their original cost and traders appear to have an infinite amount of sacks full of second hand clothes.

This market is a source of commerce, feeding into the local economy and it enables people like John Mwangi to earn an income.

“This trade is what enables me to take care of my daily needs. I do not have skills in any other trade. If it stops I would be stranded with nowhere to go,” says Mwangi.

Recycling fashion helps to cut down the mountains of waste the world produces each year, but the sheer volume of poor quality second hand textiles arriving here is creating another waste problem, according some groups.

What the traders in Gikomba Market can’t sell gets burned or dumped onto waste heaps like this one.

Here, the poorest like Damaris Wanjiru hope to clothe their families and perhaps make a little money to feed their children.

The mother of four says: “We usually search for second hand clothes in the rubbish after which we sort them out. We then pick the ones that are of the best quality and then we wash them. We take some of the clothes to our children and we also wear some. We also have people who come to buy the clothes from us. We make money from our sales and wear the leftovers.”

The United Nations Environment Program (UNEP) has been critical of the textile industry for the impact its production has on the environment.

It says the clothes industry is responsible for eight percent of global greenhouse gas emissions which contribute to climate change, while at the same time $460 billion worth of usable clothes are thrown away each year.

Janet Chemitei from the environmental group Greenpeace argues wealthier countries are using countries like Kenya as waste disposal grounds for rubbish they can’t recycle themselves.

In a report called”Poisoned Gifts”, Greenpeace argues the second hand clothes are little more than textile waste and the imports threaten locally made products and textile industries.

According to Greenpeace it’s been difficult for sub-Saharan countries to ban second hand clothes from the US because they’ve struck preferential trade deals with America in what was called the African Growth and Opportunities Act.

According to a report posted by the Council on Foreign Relations think tank, the deal has worked in America’s favour because the African nations import more from the US than they export.

Organizations like UNEP are encouraging the growth of new industries which can create new uses for textile waste in Kenya.

One of them is Africa Collect Textiles, collects used textiles for recycling.

The company’s co-founder Alex Musembi agrees with Greenpeace’s findings: “According to the report that I have read, 20 to 30 percent of the waste that comes from the Global North is pure trash so that is the problem that we are talking about. The textile waste, waste problem.”

Africa Collect Textiles upcycles textile waste into rugs, pencil bags and other products which it exports to Switzerland, Germany and the Netherlands.

The start-up has an income of 50,000 euros annually and 16 full time employees.

The company has established 35 drop off points where people can leave clothes they no longer have a use for, but it only collects cotton.

“I am talking about Nike, the like of Adidas and Tommy Hilfiger, the likes of H&M, the likes of Shein etc, they should come up and set up what we call the EPR fund, that is the Extended Producer Responsibility, and for every Euro they sell in terms of profitability, it has to be channeled back to companies like Africa Collect Textiles who are trying to solve their mess here in the country,” says Musembi.

But even with extra support, there is more textile waste in rivers like this than Africa Collect Textiles can ever hope to recycle.