Algeria: The death toll from forest fires rises to at least 38 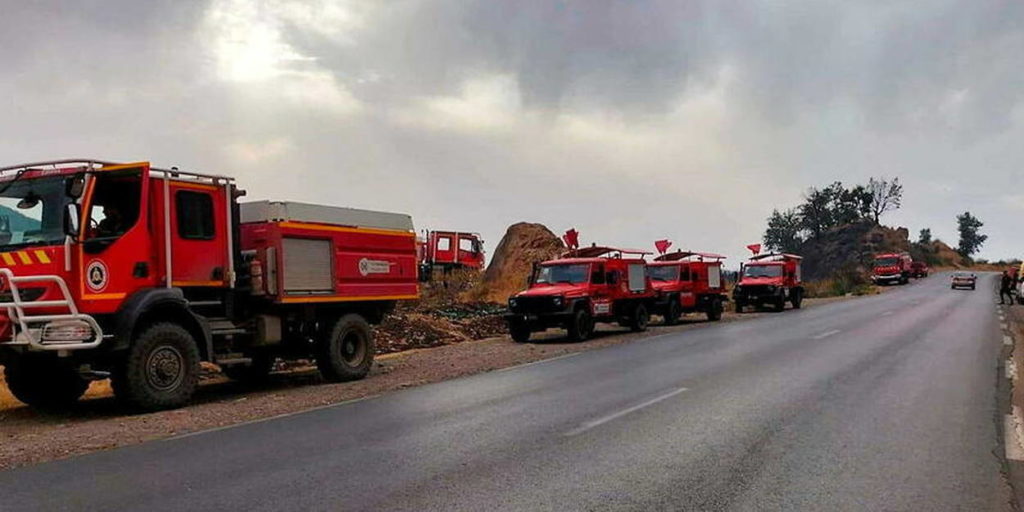 At least thirty eight people have died and several dozen were injured in forest fires that affected Wednesday 14 departments in northern Algeria, reviving the spectre of the summer of 2021, the deadliest in the country’s modern history.

Several people suffered burns or breathing difficulties but no new official figure was given on the number of injured.

A previous report by the civil protection said that four people had various degrees of burns and 41 others suffered from breathing difficulties in Souk Ahras, another border town with Tunisia.

Impressive television images show residents of this city fleeing their homes in the face of flames.

According to local media, more than 350 families fled their homes in Souk Ahras.

The gendarmerie closed several roads because of the fires.

“Thirty-nine fires in 14 wilayas (prefectures) are ongoing,” said in the afternoon the civil protection, noting that the wilaya of El Tarf recorded the largest number of fires with 16 fires, many still ongoing.

According to the private television Ennahar, about fifty people are hospitalized in El Tarf, a city of about 100,000 inhabitants.

Helicopter water bombers intervened in three prefectures including Souk Ahras, a town of about 500,000 inhabitants. Those of the civil protection are supported by army helicopters.

Algeria has chartered a Russian water bomber Beriev BE 200, but after having intervened on different fires, it has suffered a breakdown and will be operational again only from Saturday, according to Beldjoud.

These fires revive wounds and the debate on the lack of water bomber aircraft in sufficient numbers, which had already agitated the country last summer.

According to the Mena Defense website, following their quarrel with Spain, the Algerian authorities have cancelled a contract with the Spanish company Plysa, a specialist subsidiary of the airline Air Nostrum, for the supply of seven water bomber aircraft.

At the end of June, Algeria suspended a 2002 “treaty of friendship, good neighborliness and cooperation” with Spain, after Madrid reversed its position on the Western Sahara issue to align itself with Morocco.

No plan B has been foreseen to replace all these Spanish aircraft, according to various media.

Since the beginning of August, 106 fires have broken out in Algeria, destroying 800 hectares of forest and 1,800 hectares of coppice, said the Minister of the Interior.

“Some of these fires are caused,” said Beldjoud.

Algeria, the largest country in Africa, has only 4.1 million hectares of forests, with a meager reforestation rate of 1.76%.

Every year, the north of the country is affected by forest fires, but this phenomenon is increasing from year to year due to climate change.

The summer of 2021 was the deadliest: at least 90 people died in forest fires that ravaged the north, where more than 100,000 hectares of coppice went up in smoke.

The warming climate increases the likelihood of heat waves and droughts and, in turn, fires.