Calls for peace in Kenya as presidential race tightens 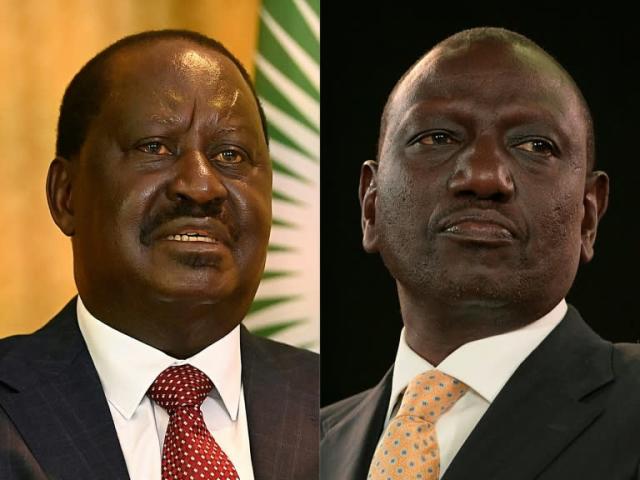 Kenyans prayed for peace Sunday as they waited anxiously for the final outcome of a tight presidential race, with the two frontrunners neck and neck, according to partial official results.

As of Sunday morning, Deputy President William Ruto had scored 51.25 percent of the vote, reversing earlier gains for his main rival Raila Odinga, who had 48.09 percent, according to data from the election commission covering nearly 50 percent of constituencies.

Tuesday’s vote passed off largely peacefully but after previous elections sparked deadly violence and rigging claims, the Independent Electoral and Boundaries Commission (IEBC) is under intense pressure to deliver a clean poll and release results by 16 August.

Riot police were deployed overnight inside the commission’s heavily-guarded tallying center in the Kenyan capital Nairobi after political party agents disrupted the process, hurling rigging allegations at each other.

The wait has left Kenyans weary, with many hoping that any disputes over the result are addressed peacefully through legal means.

“We call on all political candidates, their supporters and the public to exercise restraint. We must all avoid raising tensions that could easily trigger violence,” the group of 14 organizations said.

The poll pitted Odinga, a veteran opposition leader now backed by the ruling party, against Ruto, who was widely expected to succeed President Uhuru Kenyatta until his boss joined hands with former foe Odinga in a dramatic shift of political allegiances.

‘Let us have peace’

Both candidates have pledged to maintain calm regardless of the election’s outcome, with the memory of the 2007-08 and 2017 post-poll violence still fresh for many Kenyans.

At a church service in Nairobi on Sunday, Odinga, 77, recited the opening lines of the Peace Prayer of St Francis and said: “I want to become an instrument to bring peace, to heal, to unite and keep the hope alive in our country.”

Congregants in Odinga’s stronghold of Kisumu also prayed for a peaceful outcome, with 81-year-old bishop Washington Ogonyo Ngede telling his flock: “Don’t let politics divide us. We must remain united.”

“Because leaders come and go but the country of Kenya lives forever,” said Ngede, a lifelong friend of the Odinga family.

“Let us have peace,” he said to cheers and ululations from the gathering of some 300 worshippers.