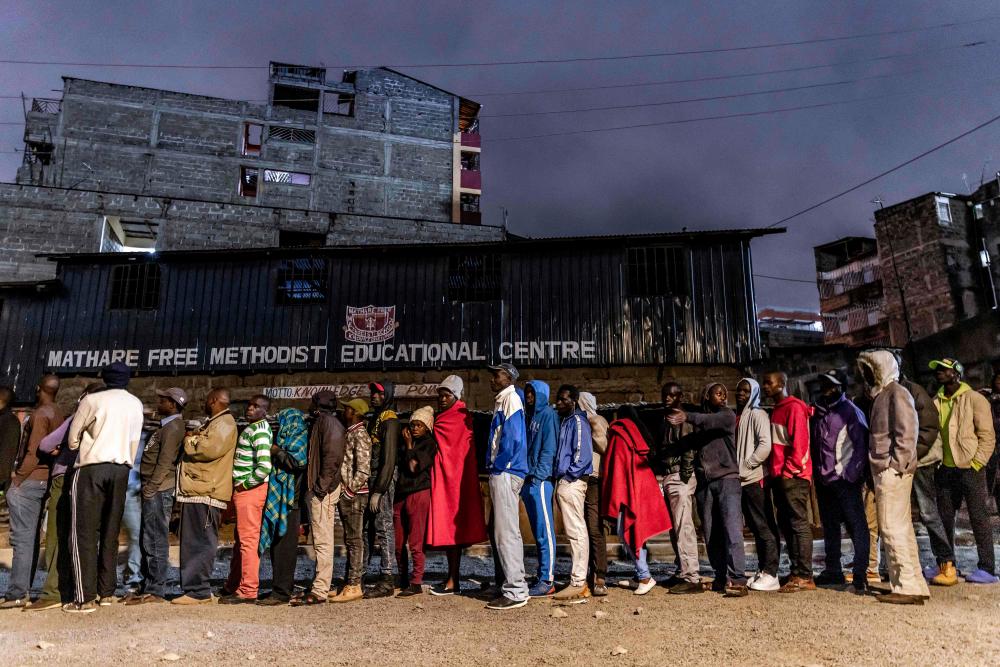 Kenyans voted largely peacefully on Tuesday as two political heavyweights battled it out in a high-stakes race for the presidency of the East African powerhouse.

The country is hoping for an orderly transition of power after almost a decade under two-term President Uhuru Kenyatta, but concerns about vote-rigging linger after past election disputes spiraled into bloodshed.

Across the nation, voters lined up well before dawn to cast their ballots in what has been billed as a key test for democracy in a country where ordinary people have increasingly become disenchanted with the political elite.

Many said they hoped it could improve their lives, as they struggle to put food on the table amid soaring inflation and with millions going hungry because of a crippling drought.

By noon, six hours after polling began, turnout was at just over 30 percent of the 22 million registered voters, according to the Independent Electoral and Boundaries Commission.

Comparable figures for the August 2017 election were not immediately available but overall turnout then reached 78 percent.

Incidents of delays in opening polling stations and problems with electronic voter registration equipment were reported in several areas.

Pressure is on the IEBC to ensure a free and fair vote in all six polls — for the presidency as well as for senators, governors, lawmakers, woman representatives and some 1,500 county officials.

The IEBC — which has a budget of almost $350 million for the vote — acknowledged that about 200 electronic devices had failed, out of a total of more than 46,000.

In Wajir, a county on the border with Somalia, a gunfight left election officials trapped inside an office where ballots were stored, and polling has been suspended there, the IEBC said.

Police also fired tear gas after youths blocked a road with burning tyres in Nakuru county in western Kenya after a local vote was suspended.

No presidential election outcome has gone uncontested since 2002, and there will be an anxious wait for this year’s results which are not expected for several days.

“This election is different from the others, it’s way (more) calm and peaceful,” 52-year-old mother of five Joyce Kosgei said in the Rift Valley village where Ruto cast his ballot.

Analysts have suggested that Odinga, a onetime political prisoner and former prime minister who is making his fifth stab at the presidency, could edge past his younger rival.

If neither wins more than 50 percent, Kenya would have to hold a run-off for the first time in its history.

Ruto has painted the election as a battle between ordinary “hustlers” and “dynasties” — the Kenyatta and Odinga families that have dominated Kenyan politics since independence from Britain in 1963.

Since neither man belongs to the dominant Kikuyu tribe, which has produced three of the country’s four presidents, the election will open a new chapter in Kenya’s history.

Kenya’s international partners are closely watching the vote in a country deemed a beacon of regional stability.

Both Odinga and Ruto have urged a peaceful election, but fears remain that if the loser challenges the outcome — as widely expected — there could be unrest.

Security is tight, with more than 150,000 officers deployed across the country of about 50 million.

The trauma of the 2007 poll, which was followed by politically motivated ethnic clashes that killed more than 1,100 people, runs deep.

Odinga’s challenge to the 2017 election result that saw then foe Kenyatta re-elected was met with a heavy-handed police response that left dozens dead.

Some observers say economic pressure could vie with tribal allegiance as the big motivator for voters in a country where a third of the population lives in poverty.

Lawyers David Mwaure and George Wajackoyah — an eccentric former spy who wants to legalize marijuana — are also standing for president but are likely to trail far behind the front runners.

If Odinga wins, his running mate Martha Karua would become deputy president, the first woman to hold the post.

The new president will have to tackle the cost-of-living crisis, youth unemployment, a $70-billion debt mountain and entrenched corruption.

Already battered by the Covid pandemic which threw hundreds of thousands out of work, Kenyans are now suffering from the Ukraine war, which has sent food and fuel prices spiralling.

“I have come to vote to pick someone who bring change to this country,” said unemployed 34-year-old Ruth Iminza as she cast her ballot in the Nairobi slum of Kibera.

“Everything has gone up including school fees for our children.”