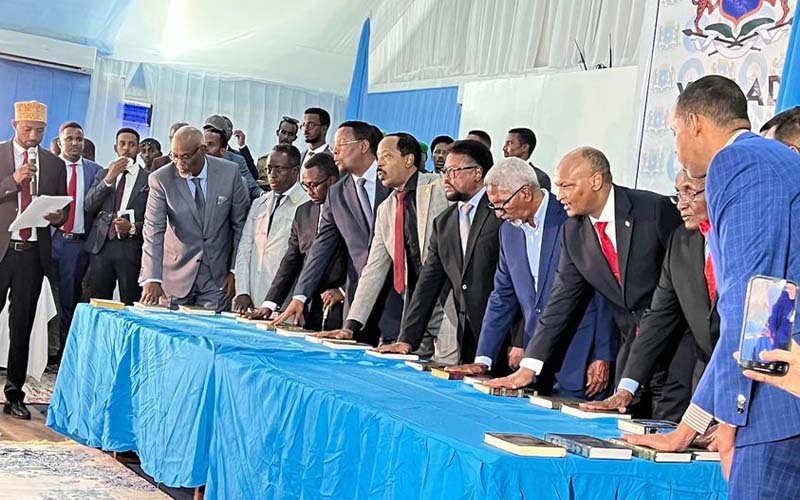 In Somalia, Sunday, a majority of members of parliament approved the country’s appointed cabinet by a show of hands.

“The quorum is 237 MPs, seven MPs refused, one MP abstained while some 229 MPs endorsed the approval the new cabinet ministers, therefore it is approved“, the speaker of the house,  Adan Mohamed Nuur Madobe, said.

If there was no immediate claim of responsibility for the attack, security challenges will remain top of the agenda of the newly appointed cabinet.

The cabinet, which includes a former Al-Shabaab deputy leader, Mukhtar Robow, shown here on the right, is also known as Abu Mansur. He is sworn in as Religious affairs minister.

“I thank Allah. And I am very pleased that MPs unanimously approved my government and its program to perform, Allah Willing“,  PM Hamza Abdi Barre told.

In addition to the Al-Shabaab insurgents who have been waging a bloody war against the government and the people of Somalia for 15 years, a looming famine will also be one of the new cabinet s priority.

Prior to the Russia-Ukraine conflict, Somalia imported 90% of its wheat from both countries. In Mogadishu, food stocks provided by international donors have been depleting.