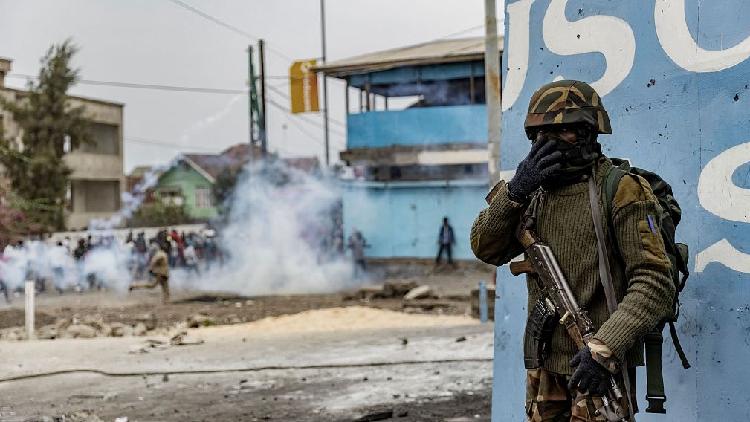 U.N. Secretary-General Antonio Guterres said he was “outraged” by the deaths Sunday of two people when peacekeepers opened fire at a border post with Uganda in the troubled eastern Democratic Republic of Congo.

Guterres “stresses in the strongest terms the need to establish accountability for these events” and endorses “the detention of military personnel involved in this incident and the immediate investigation,” a statement from the secretary-general’s deputy spokesman, Farhan Haq, said.

In a video of the incident shared on social networks, men, at least one dressed as a police officer and another as a Congolese soldier, are seen advancing toward the convoy stopped on the other side of the closed fence in Kasindi, in the territory of Beni, on the border with Uganda.

After a verbal exchange, the alleged peacekeepers are seen firing shots before opening the gate and crossing the post.

“Soldiers from the Intervention Brigade of the Monusco force returning from leave opened fire at the border post for unexplained reasons and forced their way through. This serious incident caused loss of life and serious injuries,” the UN mission said in a statement.

“The toll is two dead,” Joel Kitausa, a civil society leader in Kasindi, told AFP, adding that 14 people were injured.

Earlier, Barthélemy Kambale Siva, the North Kivu governor’s delegate in Kasindi, had given a toll of eight seriously injured, including two policemen from the border post.

The head of Monusco, Bintou Keita, said she was “deeply shocked and dismayed by this serious incident,” according to the mission’s statement.

“Faced with this unspeakable and irresponsible behavior, the perpetrators of the shooting have been identified and arrested pending the conclusions of the investigation which has already begun in collaboration with the Congolese authorities,” said Monusco.

“Contacts have also been established with the country of origin of these soldiers so that a judicial procedure can be initiated urgently with the participation of the victims and witnesses, so that exemplary sanctions can be taken as soon as possible,” the UN mission added, without mentioning the nationality of these peacekeepers.

The DRC government “condemns and strongly deplores this unfortunate incident, the provisional toll of which is two compatriots dead and 15 others injured,” its spokesman Patrick Muyaya said in the evening.

In conjunction with Monusco, the authorities have “initiated an investigation to establish responsibility, to find out the motives for such a crime and to obtain severe sanctions against the peacekeepers behind this tragedy,” he confirmed.

Kinshasa, which has called on the Congolese population “to remain calm”, warns that “the peacekeepers concerned will no longer be able to be part of the Monusco contingents, pending the outcome of the plan to withdraw this UN force from the DRC”.

Last week, deadly demonstrations accompanied by destruction and looting took place in several towns in eastern DRC to demand the departure of the United Nations.

In Goma, Butembo, Beni and other towns, protesters stormed Monusco facilities. Nineteen people, including three peacekeepers, were killed in the violent protests.

The protesters accused the peacekeepers of ineffectiveness in fighting the 100 or so armed groups responsible for the chaos that has plagued the eastern provinces for nearly 30 years.

One of the largest and most expensive UN missions in the world, Monusco has been in the DRC since 1999. It currently has more than 14,000 peacekeepers, with an annual budget of one billion dollars.

On a visit to the DRC, Jean-Pierre Lacroix, head of the UN peace department, said Saturday that he had come to “talk with the Congolese authorities, to examine the means by which we can both avoid the recurrence of these tragic incidents and, above all, work better together to achieve our objectives.

“We hope that the conditions will be met, particularly the return of state authority, so that Monusco can complete its mission as soon as possible and make way for other forms of international support,” he said.