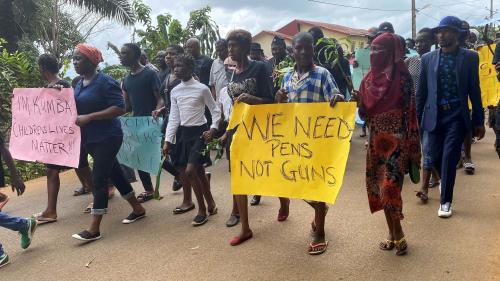 Nigeria labor is accusing the authority in Nigeria of unfulfilled pledges adding that the leaders have for long neglected the education sector and allowed it to suffer.

The president of the Nigeria labor congress, Ayuba Wabba and some activists led hundreds of protesters on Wednesday in Abuja against the continued shutdown of Nigeria universities.

The protesters who converged at the Unity Fountain, Abuja marched to the National Assembly chanting solidarity songs and carrying placards with various inscriptions.

The labor union says that the country’s public university system has been shut for five months is not a good commentary adding that no reason is good enough for the universities to remain shut.

Addressing the protesters, House committee chairman on Labor, senator Mohammadu Wudil assured the labor union that the lawmakers will meet with the various parties in the crisis.

“You have submitted your demands and I am sure the president knows we have an input to show that we are for every single Nigerian. So what we agree to do is that as soon as possible, we are going to make sure this chamber brings together the minister of Labor, Labor union and all other parties involved for a dialogue,” he added.

Some parents say the problem of having university students at home for over five months is devastating and needs drastic action.

“You see your children on the phone, what are they watching or interacting with? They are not productive; at the age of such children, they should be learning and nothing more and you have cut them off from such. The aggressiveness at home is devastating,” said Lucky Chucks Samuel, a Parent.

“You find some of them in a depressing situation at home, ordinarily, they would have graduated. So it is very sad and I think it is deliberate, our leaders are not helpful,” said Madam Grace.

Although there was heavy presence of various security personnel on the roads of Abuja, the protest was conducted in a peaceful manner. The nationwide protest began on Tuesday in various states of the federation and ended on Wednesday in Abuja with a mass protest

The union had rejected the introduction of the integrated payment system as a payment platform for the workers as introduced by the government and then embarked on a strike action in March this year over disagreement with the government.