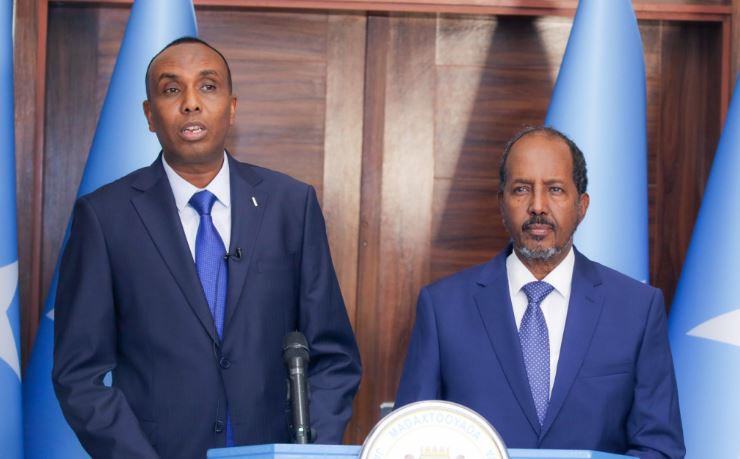 Somalia’s President Hassan Sheikh Mohamud appointed lawmaker Hamza Abdi Barre as the country’s prime minister on Wednesday, with the new premier facing a host of challenges including a looming famine and an Islamist insurgency.

“The president wishes the new PM utmost success as he leads the government’s ambitious reform agenda and calls on Somali people to render him their unwavering support,” the presidency said on Twitter.

The 48-year-old MP from the semi-autonomous state of Jubaland replaces Mohamed Hussein Roble, whose 22 months in office were marred by a rancorous dispute with Mohamud’s predecessor Mohamed Abdullahi Mohamed that threatened to plunge Somalia back into violent chaos.

“I am very happy that I have your confidence Mr President, and this shows that you believe I can be trusted with this huge task,” Barre told a joint news conference, promising “to work day and night” at the job.

“I also ask the new prime minister to accelerate his priority tasks which include issues such as security, droughts, reconciliation… and to work on improving the country’s relationship with the rest of the world,” he added.

Mohamud – who previously served as president between 2012 and 2017 — unveiled his choice for prime minister just six days after he was inaugurated at a ceremony in Mogadishu attended by several regional heads of state.

His election in mid-May has stirred hopes that his presidency will draw a line under the political crisis that festered for more than a year under his predecessor, better known by his nickname Farmajo.

Roble was handpicked by Farmajo as premier in September 2020 but the two men fell out over long-delayed elections and a raft of political and security issues.

The former president also had confrontational relationships with several of Somalia’s states, particularly the semi-autonomous Jubaland and Puntland.

Regional authorities in Puntland and Jubaland have often clashed with the Mogadishu government over what they see as undue interference in their affairs.

Barre, whose name had circulated widely on social media before his appointment was officially announced, was voted in as an MP in Kismayo, the commercial capital of Jubaland in December, in a long-delayed and chaotic election process.

With a background in research and academia, the new premier has also been involved in the education sector, co-founding Kismayo University and leading a community-based network that aimed to rebuild the country’s schooling system after it was battered by the civil war.

In his inauguration speech on June 9, Mohamud vowed to foster “political stability through consultation, mutual endorsement, and unity among… the federal government and federal member states,” striking a contrasting tone to Farmajo.

Observers say his choice of Hamza — who has close ties with Jubaland president Ahmed Madobe — is a sign of his intent to build better relationships with Somalia’s regional leaders.

Hamza, who served as the chairperson of the Jubaland Independent Boundaries and Electoral Commission in 2019-20 and worked in the federal government for four years prior to that, is the first prime minister to emerge from Somalia’s Ogaden clan.

Madobe, who crossed swords with Farmajo but supported Mohamud in last month’s presidential election, also belongs to the same clan.

Somalia has not held a one-person, one-vote election in 50 years and few of its 15 million people played any part in choosing Mohamud.

Instead, polls follow a complex indirect model, where state legislatures and clan delegates pick lawmakers for the national parliament, which in turn chooses the president.