At least 50 civilians died in an attack by suspected Islamist militants in northern Burkina Faso, government spokesman Lionel Bilgo said Monday, in one of the bloodiest clashes since a military coup in January.

“The army has so far found 50 bodies” after the village of Seytenga was attacked overnight Saturday, Bilgo said, adding that the toll “may rise.”

“Relatives (of the victims) have returned to Seytenga and may have taken bodies away,” he told a press conference. 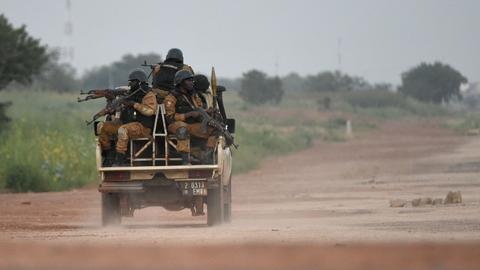 Seytenga was the site of bloody fighting last week.

Eleven gendarmes were killed on Thursday, prompting a military operation that the army said led to the deaths of around 40 jihadists.

“The (weekend) bloodshed was caused by reprisals to the army’s actions,” said Bilgo.

“The country has been hit but the army is doing its job.”

Humanitarian organizations in the region said around 3,000 people were being housed in neighboring towns after fleeing from the village.

The landlocked Sahel state is in the grip of a seven-year-old insurgency that has claimed more than 2,000 lives and forced some 1.9 million people to leave their homes.

Attacks have been concentrated in the country’s north and east, led by assailants suspected to have links with Al-Qaeda or the Islamic State group.

The latest raid is one of the bloodiest since a military putsch in January, when colonels angered at failures to roll back the insurgency ousted the elected president, Roch Marc Christian Kabore.

But after a relative lull, attacks resumed, inflicting a toll of nearly 300 civilian and military deaths over the past three months.

The military takeover was preceded by two attacks that stunned the country.

The first, in Solhan in the northeast, claimed 132 lives in June, while the second in Inata, in the north, killed 57 gendarmes in November.

The Inata attack – the biggest single-day loss among the security forces in the history of the insurgency – was particularly shocking.

It targeted gendarmes who had been due to be relieved and had appealed for help before the attack, saying they were running short of food and ammunition.

On Saturday, several hundred people demonstrated in the eastern town of Pama, saying their region had been “abandoned” by the authorities despite a militant siege that had begun in February.

Other towns in the north and east, including Djibo, Titao and Madjoari, are also in the grip of de-facto blockades by the jihadists, requiring resupply under military escort.

“Our troops are facing a heavy challenge – they are under continuous pressure,” Bilgo admitted.