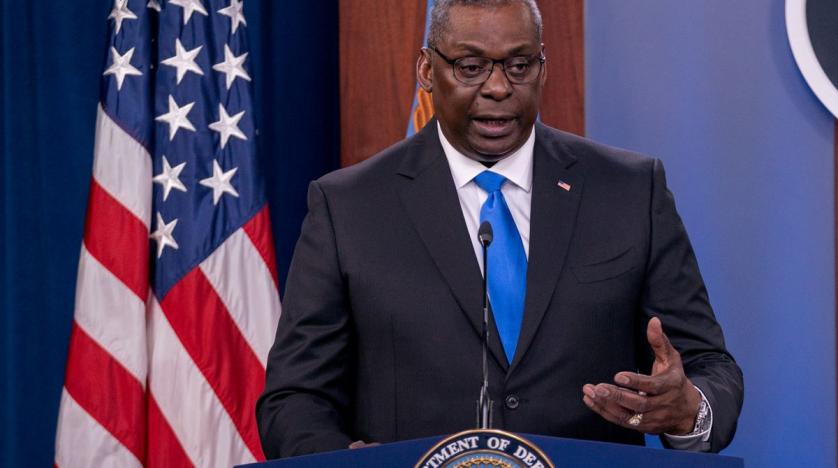 The US Defense Secretary said Chinese military activity around the self-governing island threatened to change the status quo. Lloyd Austin said Washington would continue to stand by Taiwan at an event in Singapore.

US Defense Secretary Lloyd Austin criticized China on Saturday for a “more coercive and aggressive approach to its territorial claims.”

Speaking at the Shangri-La Dialogue in Singapore, Asia’s premier defense conference, Austin said there had been an “alarming” increase in the number of unsafe and unprofessional encounters between Chinese planes and vessels with those of other countries.

“We’ve witnessed a steady increase in provocative and destabilizing military activity near Taiwan, and that includes PLA [Chinese military] aircraft flying near Taiwan in record numbers in recent months and nearly on a daily basis,” Austin said.

Taiwan and China split during a civil war in 1949, but China considers it a renegade province to be reunited with the mainland.

How likely is a Chinese invasion of Taiwan?

Beijing warning if ‘anyone dares to split Taiwan from China’

Austin’s comments come a day after he met with Chinese Defense Minister General Wei Fenghe on the sidelines of the conference for discussions where Taiwan featured prominently.

Wei had warned Austin that “if anyone dares to split Taiwan from China, the Chinese army will definitely not hesitate to start a war no matter the cost,” according to the Chinese Defense Ministry quoting him.

He also said that Beijing would “smash to smithereens any ‘Taiwan independence’ plot and resolutely uphold the unification of the motherland,” according to the ministry.

Austin said that the United States’ policy on Taiwan was to remain opposed to “any unilateral changes to the status quo from either side.”

“Our policy hasn’t changed. But unfortunately, that doesn’t seem to be true for the PRC,” he said, using the acronym for the People’s Republic of China. “We remain focused on maintaining peace, stability, and the status quo across the Taiwan Strait. But the PRC’s moves threaten to undermine security and stability and prosperity in the Indo-Pacific.”

However, he added, “We’ll do our part to manage these tensions responsibly, to prevent conflict, and to pursue peace and prosperity.”

Washington has had a long-standing policy of strategic ambiguity on whether it would defend Taiwan militarily.

But last month US President Joe Biden said  Washington would intervene if Beijing was to use force against the island.

When asked if the US would use military force, the US president replied: “Yes.” “That’s the commitment we made.”

His administration subsequently rushed to clarify that US policy on the issue has not changed.

Taiwan islands wary of China after invasion of Ukraine

Austin on Saturday also said Washington remained committed to the “one-China policy,” by which the US only formally recognizes Beijing, but maintains informal relations and defense ties with Taipei.

He said the US stands “firmly behind the principle that cross-strait differences must be resolved by peaceful means,” but also that the US would continue to meet its commitments to Taiwan.

“That includes assisting Taiwan in maintaining sufficient self-defense capacity,” he said. “And it means maintaining our own capacity to resist any use of force or other forms of coercion that would jeopardize the security or the social or economic system of the people of Taiwan.”