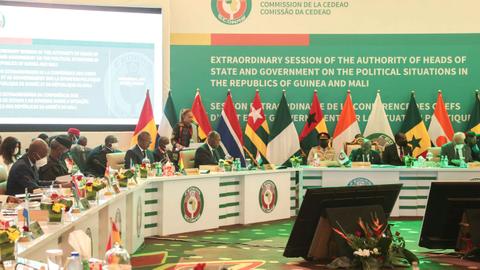 West African heads of state put off further punishing the leaders of Mali, Guinea and Burkina Faso at a regional summit Saturday, as coup leaders in all three countries continue to insist that it will take years before new elections can be held.

The 15-nation regional bloc, known as the Economic Community of West African States (ECOWAS) will convene again on July 3 before determining if further sanctions will be implemented in the three suspended members states, President of ECOWAS Commission Jean Claude Kassi Brou said.

Coup leaders in each of the three countries have proposed time frames for a political transition that are substantially longer than what the regional bloc has demanded.

Brou called the international community to increase the support especially in Mali and Burkina, where the humanitarian situation has worsened due in part the security situation, among other factors.

ECOWAS already imposed strong economic sanctions against Mali back in January shutting down most commerce, along with land and air borders with other countries in the bloc.

However, those measures have yet to bring about a change in power. In the months since, Col. Assimi Goita has only further isolated the country internationally, pulling out of a regional security force and also shutting down major French media broadcasters.

Goita’s government insisted in April that no vote can be held until 2024, which would extend their time to power to nearly four years despite originally agreeing to an 18-month transition back to democracy.

The wave of military coups began in August 2020, when Goita and others overthrew Mali’s democratically elected president.

Nine months later, he carried out a second coup when he dismissed the country’s civilian transitional leader and became president himself.

Mutinous soldiers deposed Guinea’s president in September 2021, and Burkina Faso’s leader was ousted in yet another coup in the region back in January.

The political upheaval came at a time when many observers were starting to think that military power grabs were a thing of the past in West Africa: Mali had gone eight years without one, while Guinea had made it 13 years.