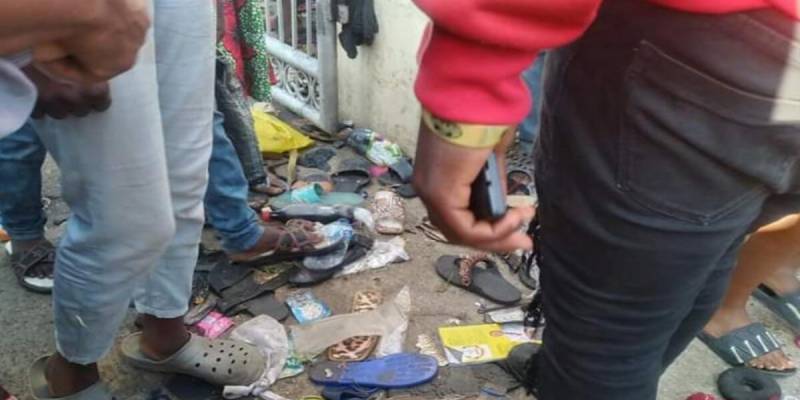 More than 30 people were killed in southern Nigeria Saturday after a stampede erupted during a crowded church charity event where food was being distributed.

Shoes and slippers lay scattered on the ground after the disaster in Port Harcourt city in southern Rivers State when people tried to force their way into the event, police and witnesses said.

A local Kings Assembly church organization was offering food and gifts for the impoverished at the Port Harcourt Polo Club when a “mammoth” crowd got out of control, Rivers State police said.

“Unfortunately, the crowd became tumultuous and uncontrollable, and all efforts made by the organizers to bring sanity proved abortive,” the police said in a statement.

“A total of 31 persons lost their lives in the stampede.”

Images posted on social media and verified by AFP showed families crying and attending to injured people, many of them children, outside the city’s military hospital.

Witnesses described frantic pushing and trampling as people trying to get into the entrance were forced back.

“They were telling people ‘Go back, go back, go back,'” said witness Chisom Nwachukwu. “Some people that were pushing from backwards were marching on those people.”

“A huge crowd from outside surged into the club through a narrow gate, resulting in the stampede,” he said.

Representatives of the church could not immediately be contacted for comment.

Saturday’s early morning disaster happened as the opposition People’s Democratic Party leaders were gathering in the federal capital Abuja to select their candidate for the 2023 presidential race, with Rivers State governor Ezenwo Nyesom Wike among the hopefuls.

Port Harcourt is the main oil hub in Nigeria, Africa’s most populous country and the continent’s largest petroleum producer.

Despite its oil wealth, as many as four out of 10 Nigerians live below the national poverty level, according to a recent World Bank Report.

The Ukraine crisis has also pushed up the cost of food and fuel across the continent as wheat and gas supplies are impacted, with aid agencies warning about worsening food insecurity in Africa.