Sri Lankans running out of food, fuel and medicine 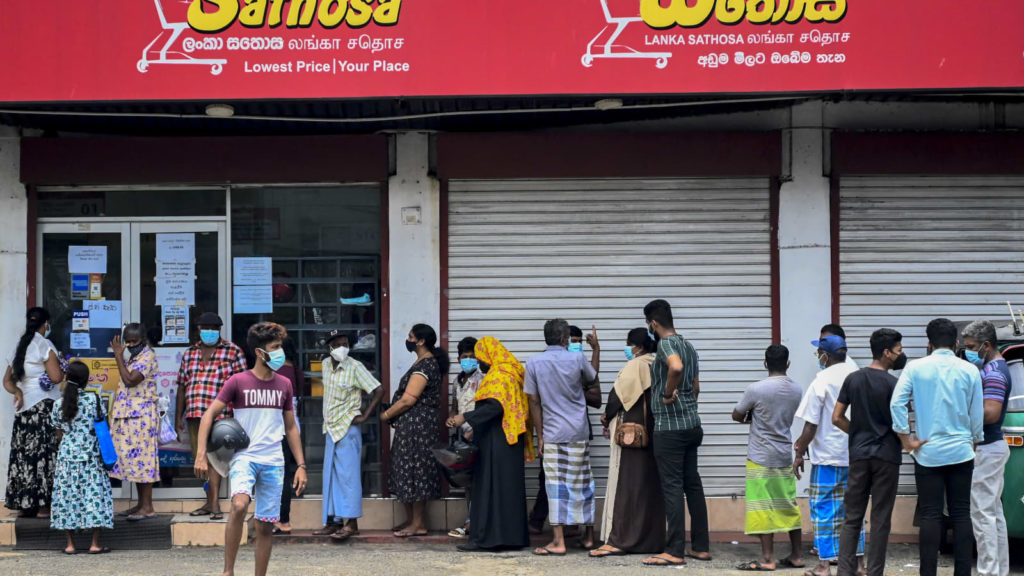 Sri Lankans told reporters how they’re struggling with shortages of food, fuel and medicine as the nation faces one of its worst economic crises in decades.

“I have a 10-month-old baby. I couldn’t even buy medicines for her when she was sick last week,” said Gunarathna Vaani, who resides in the suburbs of Sri Lanka’s capital Colombo.

“There are no medicine stocks available in the market. Even basic tablets like paracetamol or Benadryl are not there. I had to borrow medicines from my neighbors to treat my baby,” she told DW.

Pointing to empty market shelves, Vaani explained how she’s struggling to get milk powder for her child, as well as her difficulties securing gas and kerosene supplies to cook food.

“It is getting very difficult to make ends meet. We are getting help from my brothers and that is how we are surviving for now. I do not know how many days this will continue because people who are helping us are also facing hard times,” Vaani said.

“My husband cannot work. He had an accident last year, after which his right hand became paralyzed. He cannot move it. Now, I also do not have any work.”

Vaani’s is not an isolated case in the South Asian country.

Many of Sri Lanka’s 22 million people are facing acute shortages of food, fuel and medicine as the island nation finds itself battling one of the worst economic crises since it became independent in 1948.

The economy got battered by the COVID pandemic which wrecked the tourism industry — a key revenue generator for the country — and hit other major sectors as well as foreign remittances.

At the same time, the government piled up a mountain of debt by borrowing heavily from foreign investors and countries.

It also implemented badly timed tax cuts and temporarily banned the import of chemical fertilizers in a bid to encourage organic farming, a move that backfired as farmers were unable to cultivate enough crops, leading to the food shortages.

The heavy debt burden and eroding foreign exchange reserves have triggered a balance of payments crisis, making it tough to finance essential imports like vital drugs.

The worst part is the non-availability of medicines, said Jaya Kannika, a mother of three who lives about two kilometers (1.24 miles) away from Vaani’s place.

Her mother, who is suffering from diabetes, does not have enough medication to keep her blood sugar level under control.

“When we went for a health check-up three months back, they gave some medicines to my mother and told her to take them only if it was necessary as they didn’t have enough medicines in stock,” Kannika told DW.

“When I felt sick last week, I did not go to the hospital as I know that they won’t treat me,” she added.

The vast majority of Sri Lankans cannot afford treatment in private hospitals and instead rely on the universal government health system. But with shortages of vital drugs and cancellation of surgeries, the system is close to collapse, hitting common people hard.

“Sometimes they ask me to buy things that I cannot afford. It pains me as a mother. One of the teachers helped my elder daughter to buy books for her education. We could not afford to send them to tuition as well,” she said, blaming the family’s problems on soaring costs across the board.

Sri Lanka’s consumer price inflation — already at 30% — is expected to accelerate to 46% in the third quarter, according to Bloomberg Intelligence.

Surging food prices have also forced people like Baakiyam, a 71-year-old who lives alone in Nuwara Eliya district in the nation’s Central Province, to go hungry.

“I used to work as a daily-wage worker. But now there is not much work. Sometimes I eat, sometimes I do not. I cannot afford to buy much.”

The skyrocketing inflation, shortages of essential items and lengthy power blackouts have stoked public fury targeted at the government led by President Gotabaya Rajapaksa and his influential family.

Clashes broke out between government supporters and opponents this week, killing several people, including a member of parliament from the ruling Sri Lanka People’s Front party (SLPP), and injuring hundreds.

How Sri Lanka got into its worst economic crisis in decades

After the violence erupted, Prime Minister Mahinda Rajapaksa — the president’s elder brother — resigned and took shelter in a naval base.

To control the situation, the government has imposed a state of emergency and curfews, in addition to granting sweeping powers to the military and the police, including orders to shoot looters on sight.

Security forces patrolling in armored personnel carriers appear to have largely restored order, but the situation remains tense across the country.

President Gotabaya has defied calls to resign, pledging instead to form a unity government.

But the opposition has so far refused to join and called for clipping the powers of the presidency.

The central bank governor said on Wednesday he would quit within weeks unless political stability was restored to the country.

Sri Lanka has $8.6 billion of debt due this year and Colombo needs to strike a deal with creditors and the International Monetary Fund to stabilize its finances and end the crippling shortages of essential goods.

Many common people say they are afraid to speak up about their situation due to fears that it might negatively affect them and their community.

Kannika said she hopes things will change but does not see that happening in the foreseeable future.