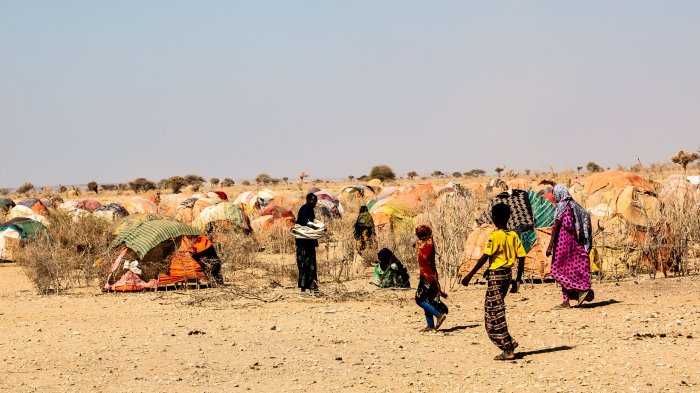 In the Somali region, 930,000 people need emergency and reproductive health support and more than 565,000 have reduced access to protection services, including women, children and GBV survivors.

GODE, Ethiopia – “When I saw my baby’s hand coming out, I ran for our lives. We traveled nearly 90 km to the nearest health facility… We are both lucky to be alive.”

Ayan Abadi Wali, 24, was recovering from a lifesaving cesarean-section delivery at the general hospital in Gode, a town in Ethiopia’s Somali region which has been one of the hardest hit by the worst drought in four decades.

Ms Abadi is currently living with her seven children at an informal settlement in the Shabelle Zone, as is her mother, Ms. Barkhado, and others displaced by the drought. Ms. Barkhado has weathered many crises in her 60 years, but said this one is the most devastating yet: “Of all the droughts I have experienced in my life, this is the worst in 40 years. This year, there is no water or pasture anywhere you go. I don’t know how we are going to survive.”

Climate shocks and extreme weather are driving humanitarian needs across the Horn of Africa, and piling unbearable pressure on already struggling health systems, with limited facilities, a severely stretched workforce and almost nonexistent infrastructure. Progress made in reducing maternal and newborn mortality and morbidity in Ethiopia is in danger of being derailed and there is an urgent need to expand coverage of maternal health and protection services to safeguard women and girls’ health and rights.

“We noticed an increase in maternal and newborn deaths in the last months. Almost all our cases are women who have traveled up to 200 kilometres to reach the facility, many with labor complications and no transport,” said Dr. Mahamed Sheh, Medical Director of the Gode General Hospital.

In eastern and southern Ethiopia, seasonal rains have now failed for the third time since late 2020, fueling mass displacement and deepening an already dire humanitarian situation. Nearly 8 million people have been affected and more than 286,000 Ethiopian Somalis, including Ms Abadi, have been displaced, fleeing their homes to survive as crops, livestock and livelihoods are wiped out.

With the number of livestock deaths reaching a staggering 1.4 million and increasing by the day, Ms. Abadi’s only source of income has evaporated as fast as her hope. “We lost everything we had – 30 goats and 10 cattle,” said Ms. Abadi. “We only have one cow left which can barely stand on its feet. It is too weak to walk.”

With no animals left to help them survive, Ms. Abadi fears for her family’s future. Women and girls on the move are at heightened risk of sexual and physical violence and coercion, and child and forced marriage spike during humanitarian crises as households lose their means of earning a living and protection mechanisms dwindle.

The grueling trek to access maternal and reproductive health services

In the Somali region, some 930,000 people need emergency and reproductive health support and more than 565,000 people are reported to have reduced access to protection services, including women, children and survivors of gender-based violence. According to the Ethiopian Public Health Institute, more than 60 per cent of those living in the Somali region are over an hour’s walk away from the nearest health facility – which may or may not be functioning if they do manage to reach it.

More than 154,000 women are currently pregnant in the Somali region, and over the course of the next month alone an estimated 2,568 women and 3,425 newborns will experience complications with potentially deadly consequences if skilled care and services aren’t available.

“Displaced mothers arrive with complications, and they leave in the same condition. We don’t have maternity wards and we can’t keep them here for a month waiting in the delivery room or in the hallway. When they come back, sometimes it’s too late,” said Aston Ma’am, a midwife at the hospital.

Although Ms. Abadi and her family have suffered huge losses, she is grateful that all her children are well for now and longs for the day when she will be able to tend her livestock again. Having been sent away from the Gode hospital when she first arrived with complications as they didn’t have a maternity ward, she was lucky to arrive in time for her life-saving cesarean section: Many women endure harrowing journeys of hundreds of kilometers, only to arrive too late to be saved.

Ensuring no mother or newborn is left behind

With the support of Irish Aid and in partnership with UNICEF, UNFPA is scaling up its response in the Somali region through a two-year package of essential health services, including by supporting critical maternity wards to help women like Ms. Abadi. Mobile health units staffed by trained midwives will also be deployed to some of the hardest-to-reach areas, and eight health facilities in the Shabelle and Erer Zones will receive emergency obstetric equipment and supplies.

Meanwhile safe spaces and one-stop centres will ensure comprehensive medical and psychosocial support for survivors of gender-based violence, and reproductive health medicine, dignity kits containing sanitary and hygiene items, and ambulances will be distributed to health centers in the region.

As of March 2022, 32 frontline healthcare providers at 14 UNFPA-supported facilities across the Somali region had been trained in post-abortion care, in partnership with the Regional Health Bureau, with the aim of reducing maternal mortality rates. Around 250 women of reproductive age also participated in community outreach sessions, which raise awareness on how to prevent gender-based violence and on the services and support available, in partnership with the Regional Bureau of Women, Children and Youth Affairs.