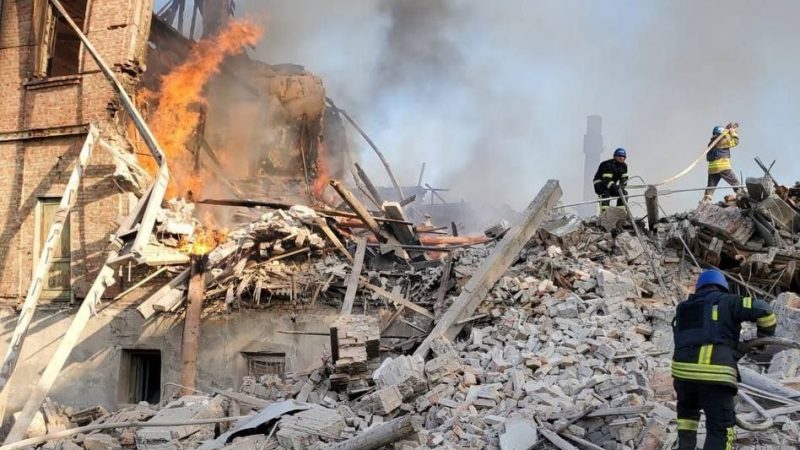 In Ukraine, where hundreds of schools have been damaged or destroyed by the ongoing violence, attacks on civilian areas are endangering children’s lives and their futures.

It has been nearly two months since classmates Stepan and Yaroslav last stepped foot in their school in Kharkiv. On 23 February, their final lesson was a history class. The next day, the 14-year-old boys woke up not to their alarm clock, but to the sound of explosions.

Now, the walls of their school – once a grand three-storey building with the motto “Success in learning – success in life” inscribed above the entrance – are black from explosions. Not a single window remains intact and the facade is pockmarked by bullets and shells.

“Now it is very difficult to recognize the building, because before the school was so bright, and now, it’s just black,” says Yaroslav, sadly.

Stepan hardly recognizes his classroom in the charred wreckage:

“There was a computer room on the second floor, with new computers,” he recalls.

The boys know from teachers that, during the Second World War, the school was turned into a military first aid centre.

“It survived that war, but not this one,” adds Yaroslav.

Both friends still vividly recall days and nights spent hiding in their basements, waiting for the shelling of Kharkiv to end.

“It was very loud, there was smoke, it smelled like soot,” says Yaroslav. “Things were burning in the area.”

Stepan remembers the walls shaking and their school coming under fire.

The school was destroyed by shelling the day before Stepan’s birthday.

Instead of celebrating with friends, Stepan had spent the day in the basement, hiding with his family from an air attack. That night, on the evening of his fourteenth birthday, the boy stared out of the window as the flames licked the walls of his school.

“I was feeling extremely sad,” he recalls.

The boys dream of the war ending and their school being rebuilt.

“I would very much like to go to this school again, because I have a lot of memories, a lot of funny stories about it,” says Yaroslav. “We had great teachers and friends there.”

UNICEF’s focus is to ensure the physical safety and psychological wellbeing of every child.

We are providing protective learning programs, socio-emotional and mental health support, as well as hygiene and educational supplies through ‘Spilno’ (unity) integrated service centres for displaced children and families.

The education response integrates mental health and psychosocial support, as well as explosive ordnance risk education (EORE), targeting children who are most at risk.