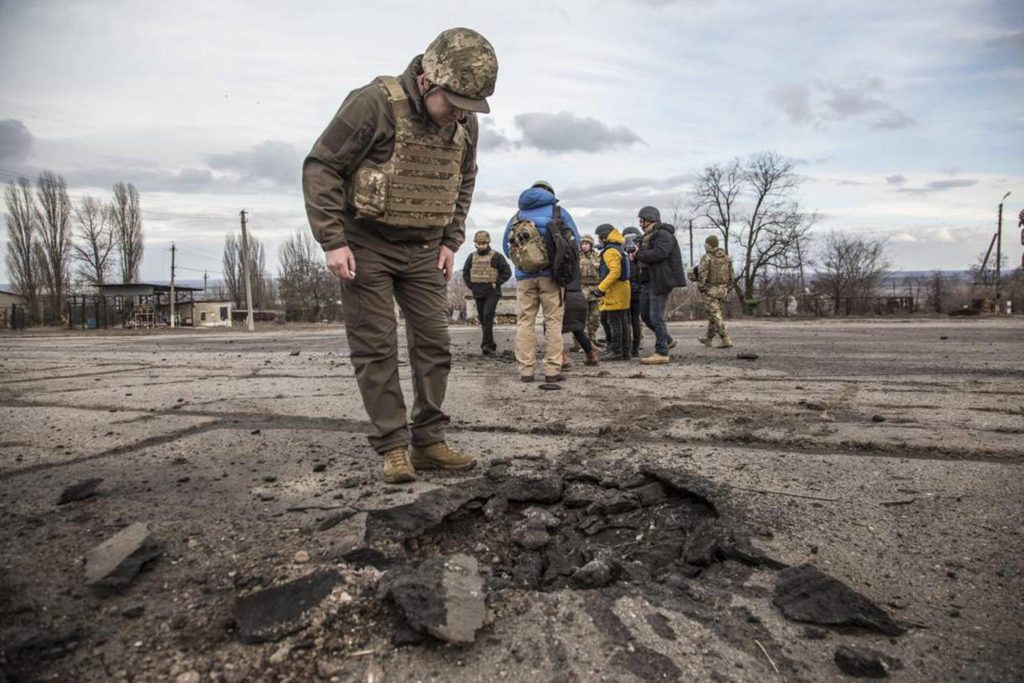 Ukrainian President Volodymyr Zelenskyy, facing a sharp spike in violence in and around territory held by Russia-backed rebels and increasingly dire warnings that Russia plans to invade, on Saturday (local time) called for Russian President Vladimir Putin to meet him and seek resolution to the crisis.

“I don’t know what the president of the Russian Federation wants, so I am proposing a meeting,” Zelenskyy said at the Munich Security Conference, where he also met with US Vice President Kamala Harris. Zelenskyy said Russia could pick the location for the talks.

“Ukraine will continue to follow only the diplomatic path for the sake of a peaceful settlement.”

There was no immediate response from the Kremlin.

Zelenskyy spoke hours after separatist leaders in eastern Ukraine ordered a full military mobilization on Saturday while Western leaders made increasingly dire warnings that a Russian invasion of its neighbor appeared imminent.

In new signs of fears that a war could start within days, Germany and Austria told their citizens to leave Ukraine. German air carrier Lufthansa cancelled flights to the capital, Kyiv, and to Odessa, a Black Sea port that could be a key target in an invasion. 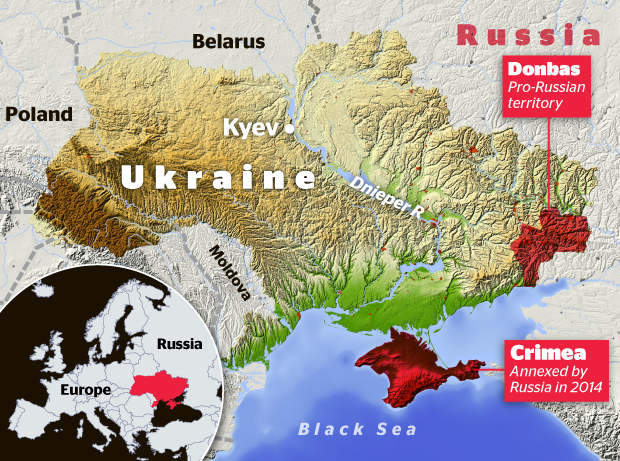 Nato’s liaison office in Kyiv said it was relocating staff to Brussels and to the western Ukraine city of Lviv. Meanwhile, top Ukrainian military officials came under a shelling attack during a tour of the front of the nearly eight-year separatist conflict in eastern Ukraine.

The officials fled to a bomb shelter before hustling from the area, according to an Associated Press journalist who was on the tour.

Violence in eastern Ukraine has spiked in recent days as Ukraine and the two regions held by the rebels each accused the other of escalation. Russia on Saturday said at least two shells fired from a government-held part of eastern Ukraine landed across the border, but Ukrainian Foreign Minister Dmytro Kuleba dismissed that claim as “a fake statement”.

Sporadic violence has broken out for years along the line separating Ukrainian forces from the Russia-backed rebels, but the recent shelling and bombing spike could set off a full-scale war.

The United States and many European countries have alleged for months that Russia, which has moved about 150,000 troops near the Ukrainian border, is trying to create pretexts to invade.

“They are uncoiling and are now poised to strike,” US Defense Secretary Lloyd Austin said Saturday during a visit to Lithuania.

Harris opened her meeting with Zelenskyy by saying the world was at “a decisive moment in history”.

Earlier Saturday, Denis Pushilin, the head of the pro-Russia separatist government in Ukraine’s Donetsk region, cited an “immediate threat of aggression” from Ukrainian forces in his announcement. Ukrainian officials vehemently denied having plans to take rebel-controlled areas by force.

“I appeal to all the men in the republic who can hold weapons to defend their families, their children, wives, mothers,” Pushilin said. “Together we will achieve the coveted victory that we all need.”

A similar statement followed from his counterpart in the Luhansk region. On Friday, the rebels began evacuating civilians to Russia with an announcement that appeared to be part of their and Moscow’s efforts to paint Ukraine as the aggressor. 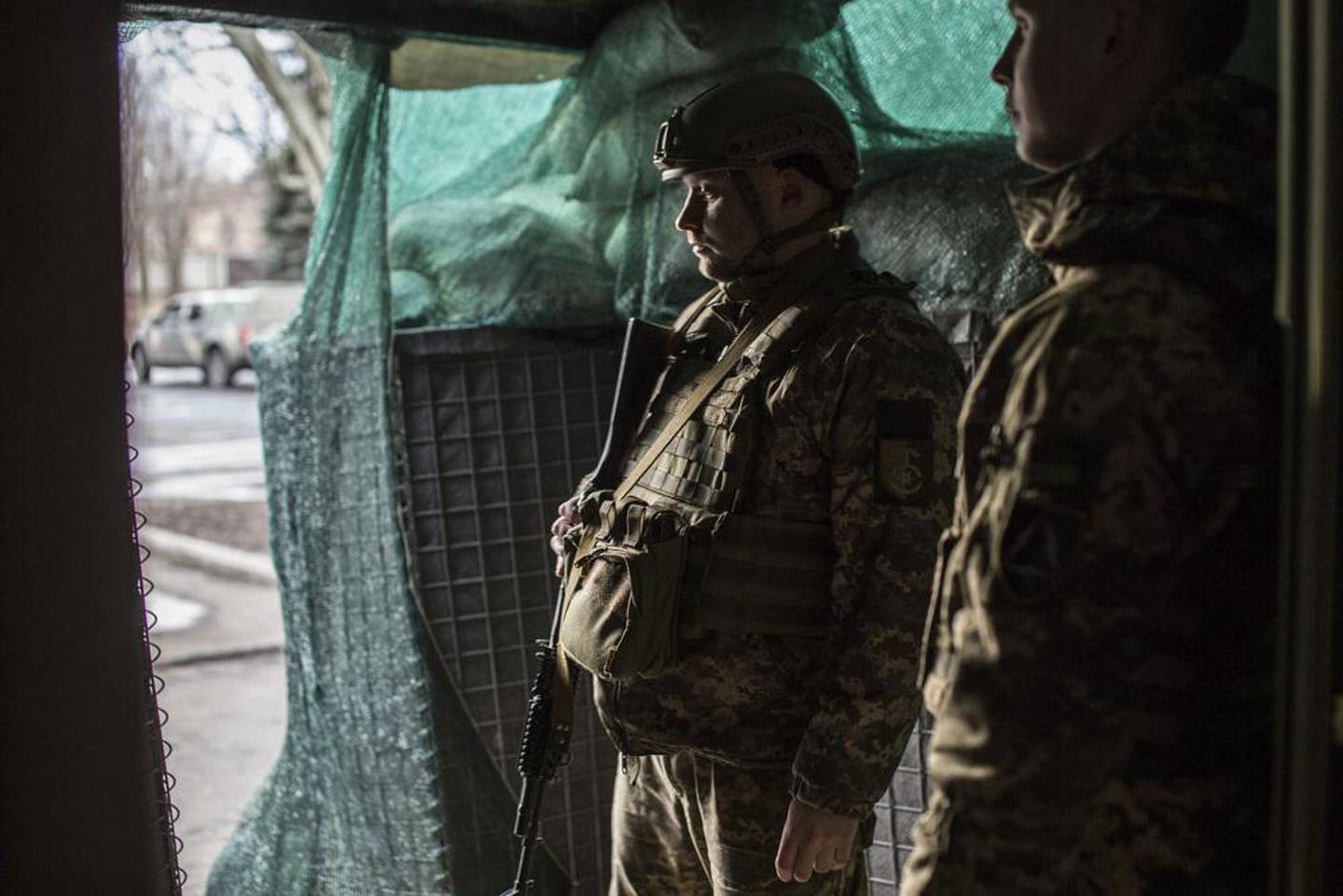 Ukrainian soldiers look out of a shelter in the center of the village of Novoluhanske. Photo AP

German Foreign Minister Annalena Baerbock said the evacuation orders could be a tactic to provide the spark for a broader attack.

“To say it very clearly, Ukraine did not give any grounds for the evacuation that was ordered yesterday,” she said. “Those are the facts on the ground. We must not allow supposed reasons for war to be constructed out of hot air.”

US President Joe Biden said late Friday that based on the latest American intelligence, he was now “convinced” that Russian President Vladimir Putin has decided to invade Ukraine and assault the capital.

“As of this moment, I’m convinced he’s made the decision,” Biden said. “We have reason to believe that.” He reiterated that the assault could occur in the “coming days.”

Meanwhile, Russia conducted massive nuclear drills on Saturday. The Kremlin said Putin, who pledged to protect Russia’s national interests against what it sees as encroaching Western threats, was watching the drills together with Belarusian President Alexander Lukashenko from the situation room.

Notably, the planned exercise involves the Crimea-based Black Sea Fleet. Russia annexed the Crimean Peninsula after seizing it from Ukraine in 2014. 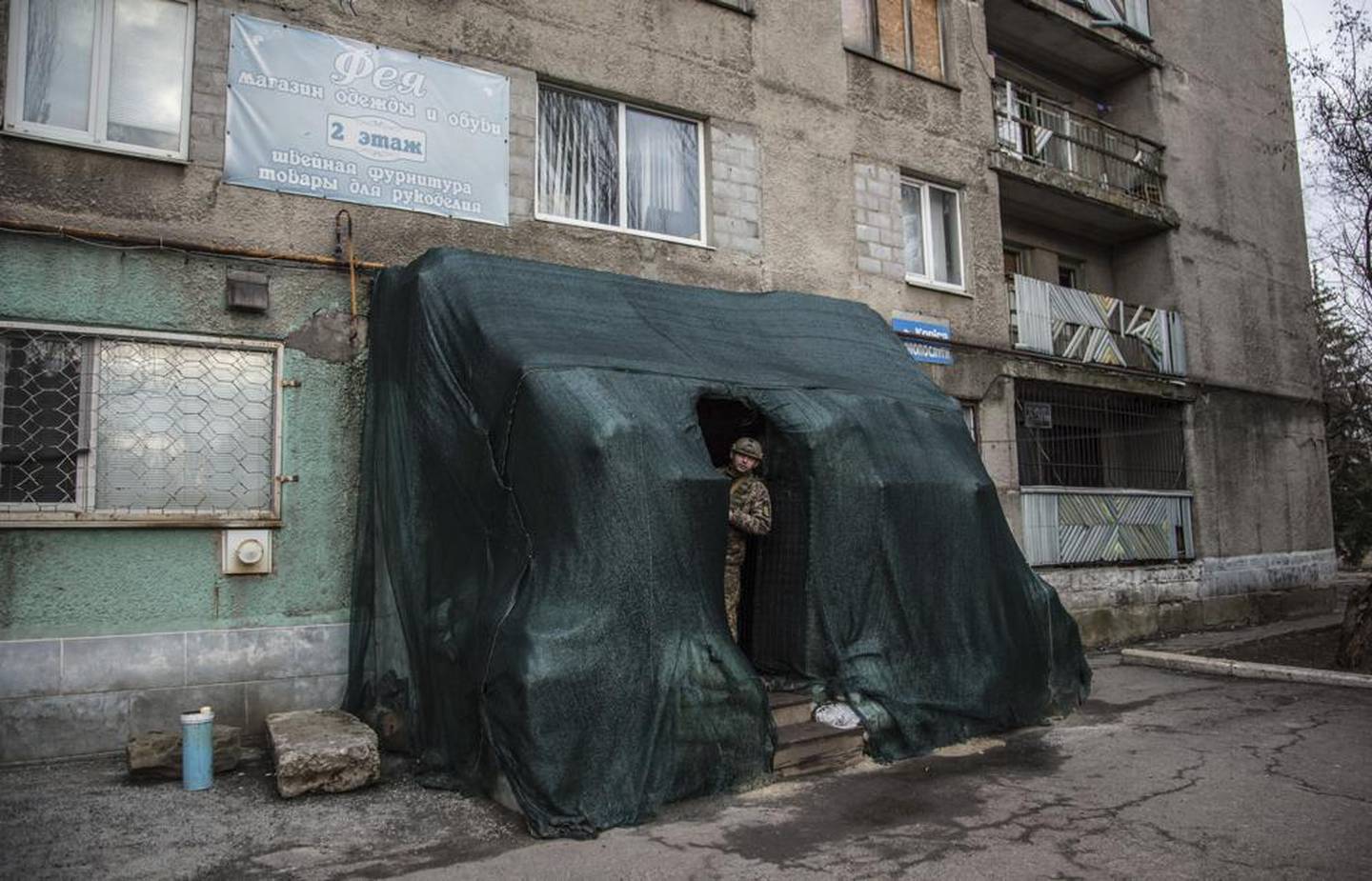 A Ukrainian soldier looks out of a shelter in the center of the village of Novoluhanske. Photo / AP

Underscoring the West’s concerns of an imminent invasion, a US defense official said an estimated 40 per cent to 50 per cent of the ground forces deployed in the vicinity of the Ukrainian border have moved into attack positions closer to the border.

The shift has been underway for about a week, other officials have said, and does not necessarily mean Putin has decided to begin an invasion. The defense official spoke on condition of anonymity to discuss internal US military assessments.

The official also said the number of Russian ground units known as battalion tactical groups in the border area had grown to as many as 125, up from 83 two weeks ago. Each group has 750 to 1,000 soldiers.

Immediate worries focused on eastern Ukraine, where Ukrainian forces have been fighting the pro-Russia rebels since 2014 in a conflict that has killed some 14,000 people. Violations of a 2015 ceasefire agreement, including shelling and shooting along the line of contact, have been common. Ukraine’s military said two of its soldiers died in firing from the rebel side on Saturday.

By Saturday morning, the separatists in the Luhansk and Donetsk regions, which form Ukraine’s industrial heartland known as the Donbas, said that thousands of residents of the rebel-controlled areas had been evacuated to Russia.

Russia has issued about 700,000 passports to residents of the rebel-held territories. Claims that Russian citizens are being endangered might be used as justification for military action.

Pushilin, the head of the Donetsk rebel government, alleged in a video statement that Ukraine was going to order an imminent offensive in the area.

Metadata from two videos posted by the separatists announcing the evacuation show that the files were created two days ago, the AP confirmed. US authorities have alleged that the Kremlin’s effort to come up with an invasion pretext could include staged, prerecorded videos.

Authorities in Russia’s Rostov region, which borders eastern Ukraine, declared a state of emergency because of the influx of evacuees. Media reports on Saturday described chaos at some of the camps assigned to accommodate the people from eastern Ukraine. The reports said there were long lines of buses and hundreds of people waiting in the cold for hours on end to be housed without access to food or bathroom facilities.

Putin ordered the Russian government to offer 10,000 rubles (about $195) to each evacuee, an amount equivalent to about half of an average monthly salary in eastern Ukraine.