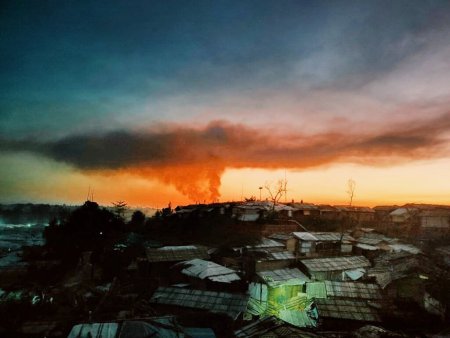 A massive fire broke out just before 17.00 local time on Sunday. The flames were contained to one area, Camp 16, but the damage was extensive. More than 3,600 Rohingya have lost their homes.

Over 3,600 Rohingya refugees have lost their homes, with almost 600 shelters burnt to the ground, according to local authorities.

“This is the second fire in the camps in 2022 and we are only in the second week of January. Our fear is not only about what happened this time, but that future fires will cause even greater destruction and cost lives. We need to provide safe, dignified shelter for refugees using fire-retardant material, and the dangerous barbed wire fencing should be removed that divides the camps and slows the escape of people fleeing the flames,” said Roberto Vila-Sexto, the Norwegian Refugee Council’s (NRC) Country Director in Bangladesh.

The origin of yesterday’s fire is unknown at this stage. However, the only temporary shelters that are allowed in the camps in Bangladesh are those made of highly flammable bamboo and tarpaulin. Refugees told NRC teams on the ground that they had to cut through the wire fencing to escape from the fire. In overcrowded settlements fenced in by barbed wire, the risk of the next disaster is always high.

The Norwegian Refugee Council is working with local partners today to assess needs.

Sri Lankans running out of food, fuel and medicine