Guineans celebrate removal of Alpha Conde by the military 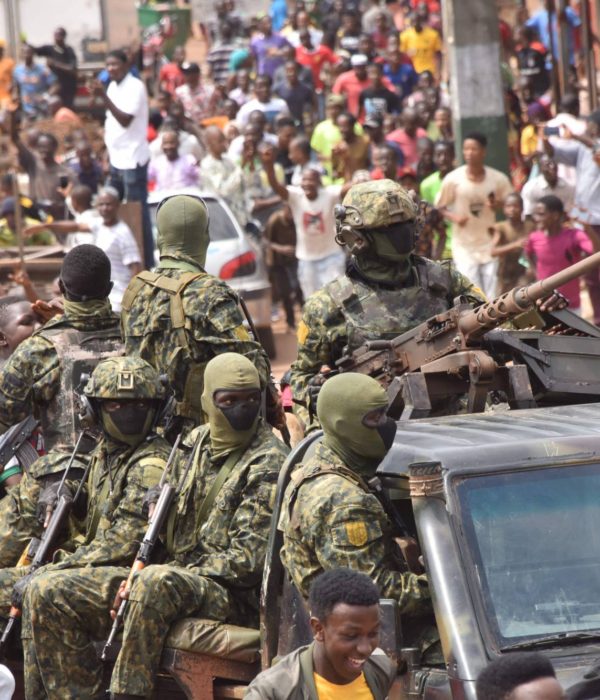 People celebrate in the streets with members of Guinea's armed forces after the arrest of Guinea's president, Alpha Conde, in a coup d'etat in Conakry, September 5, 2021. - Guinean special forces seized power in a coup on September 5, arresting the president and imposing an indefinite curfew in the poor west African country. "We have decided, after having taken the president, to dissolve the constitution," said a uniformed officer flanked by soldiers toting assault rifles in a video sent to AFP. (Photo by CELLOU BINANI / AFP)
Share
Facebook Twitter LinkedIn Pinterest Email

There were scenes of celebration on the streets of Conakry Sunday after some Guineans took to the streets to congratulate soldiers who detained President Alpha Conde following hours of heavy gunfire.

Mutinous soldiers in the West African nation then announced on state television that the government had been dissolved in an apparent coup d’etat.

“We are here to show our joy because we suffered a lot over time. With time God showed us someone who is more powerful than him (Alpha Condé). Above all, it is patience, we have been patient,” a Conakry resident said.

The country’s borders were closed and its constitution was declared invalid in the announcement read aloud on state television by army Col. Mamadi Doumbouya, who told Guineans: “The duty of a soldier is to save the country.”

Already the United Nations and countries like France have condemned the coup.

The West African regional bloc known as ECOWAS quickly condemned the developments, threatening sanctions if Conde was not immediately released.

U.N. Secretary-General Antonio Guterres tweeted that he strongly condemned “any takeover of the government by force of the gun.”

It was a dramatic setback for Guinea, where many had hoped the country had turned the page on military power grabs.

The Guinean will still live to celebrate this historic moment, but questions still linger on how the next government will be formed and its legality.