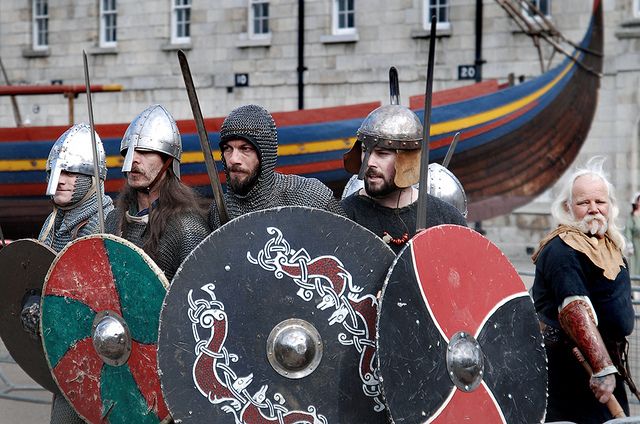 Viking warriors in full battle dress charge into battle. These reenactors are putting on a performance of the battle of the Holme from 902 AD when Anglo-Saxons fought against the Vikings of Danelaw. The actors play dead, but there are no casualties at this Viking Invasion event at Flag Fen, one of the UK’s most important bronze age sites. The swords, axes and spears are real steel weapons but their blades are blunted to make demonstrations like this safer. The Vikings certainly don’t always get the best PR and their association with murder and pillage is deeply ingrained in the public imagination. But there’s much more to this seafaring race of traders than battles. Viking encampments are scattered across Flag Fen with various demonstrations of Viking art and craft. John Davidson is demonstrating his skill with heat and hammer. His portable forge is capable of heating metal to over 2,000 degrees. Cooks are busy preparing for the night’s feast with meat roasting over an open fire and vegetables being chopped for a stew. All of the cooking utensils are authentically Viking, and although there are no known surviving recipes, the kind of food the Vikings ate has been guessed through archaeological examination. There were musicians across the camps playing authentic lyres — archaeological evidence of Anglo Saxon lyres were found at numerous burial sites across England. 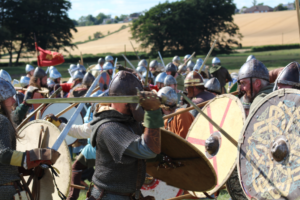 Gemma Parker sells wine by the day, but becomes Aelfgifu at the weekend, a lyre-playing Anglo-Saxon maid. She is performing her version of the folk song “Ramund the Young” in a Faroese dialect of Danish. Reenactor Kirsten Christensen is originally from Denmark. She says she enjoys educating visitors about the other side of Viking culture – most notably the trading. Flag Fen in the east of England, near Peterborough is one of the UK’s most important bronze age archaeological sites, dating back 3,500 years. Here, at a reconstruction of a bronze age roundhouse, is Sarah Wilson, heritage manager of Flag Fen Archaeology Park. Because this part of England was swamp land rich in peat, the artefacts discovered were very well preserved. Spears, swords, jewellery, boats and even the earliest wheel ever found in England have all been discovered in the area. It is believed by some archaeologists to have been an important religious site and the wealth of valuable objects were thrown into the waters as offerings to a deity. The Viking Invasion event ran from 4-5 September 2021.