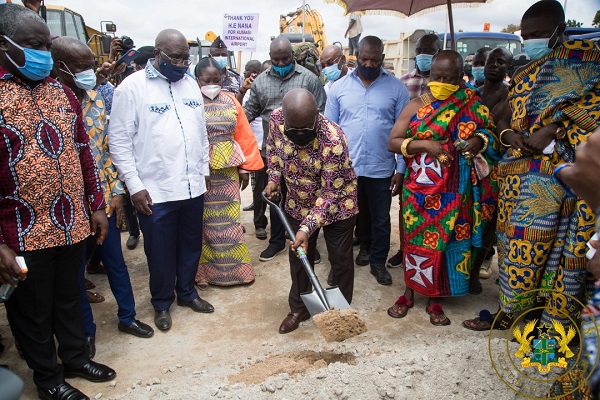 Work is yet to start on the Kaase to Adum and Obuasi railway line project almost a year after President Nana Akufo-Addo cut the sod for the project to commence on October 1, 2020, prior to election 2020.

The Kumasi-Obuasi rail project formed part of other standard gauge rail lines being constructed across the country by the New Patriotic Party’s administration as part of the election 2016 promise.

Media checks on the site where the sod was cut by President Akufo-Addo and former Minister of Railways Development Joe Ghartey revealed that not a single block has been laid on site.

The one-year deadline announced by the president to complete the project will expire in the next 24 days.

On 1st October 2020 prior to election 2020 the president and the railway development minister Joe Ghartey cut the sod for construction work to start on the 83.5-kilometer standard gauge railway line from Kumasi to Obuasi in the Ashanti Region, which forms part of a new Western Line project.

The project involves the construction of a six-kilometer line between Adum and Kaase, estimated to cost $48 million and expected to be completed within 12 months.

The President explained that apart from a 15-km narrow gauge railway line from Sekondi to Takoradi via Kojokrom built between 2012 and 2017, no kilometer of the railway line had been added.

Hence the appointment of the then sector minister Joe Ghartey to transform the rail transport sector.

Since the sod cutting event on 1st October 2020, which saw the attendance of traditional leaders led by Kaasehene Nana Mensah Bonsu and other government appointees nothing has been done on-site.

Currently, the fairground serves as the storage site for excavators withdrawn from mining sites by its owners while other parts of the site have been converted to a soccer pitch.

According to the former deputy sports minister, the chiefs have now realized that the president scammed them with mouth-watering promises and unplanned sod cutting of important projects on the eve of the elections with no available resources to commence the projects.

But Kwaku Asante Boateng deputy minister for the railways’ development ministry in response to why the project is yet to start almost a year after the sod cutting said, the land is currently not available for the project to start.

He explained that the ministry is struggling to evict encroachers who have settled on the railway lands.