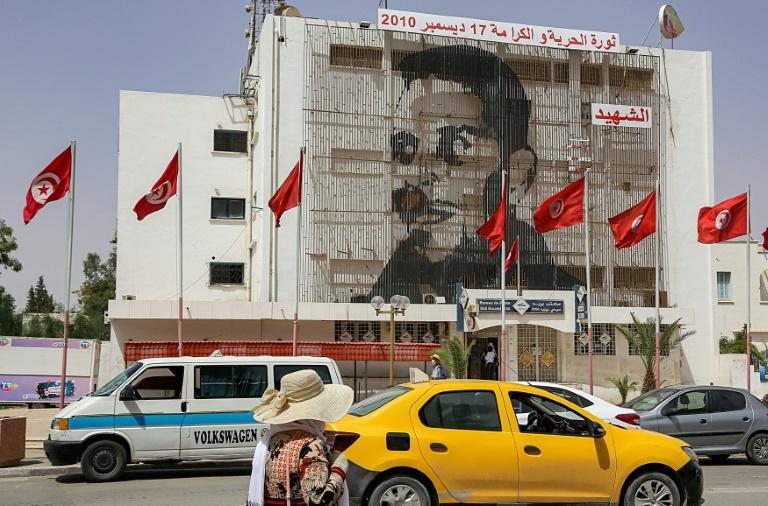 Many people in Sidi Bouzid, the cradle of Tunisia’s 2011 revolution that launched the Arab Spring, see President Kais Saied’s power grab as a necessary evil.

But there are also fears that last month’s dismissal of parliament, sacking of the prime minister and Saied’s assumption of sweeping powers may bring Tunisia one step closer to another dictatorship.

It was in this large town of central Tunisia on December 17, 2010 that Mohamed Bouazizi, a fruit and vegetable salesman angered by police harassment, set himself ablaze.

But more than a decade later, hopes for a better future have given way to anger and disappointment over the North African country’s politicians’ failure to improve living standards.

The chants of “Dignity!” and “Work!” that filled the air during the revolution have again sounded at recent demonstrations.

Ahmed Ouni is 36, unemployed and not at all happy with his lot.

“These last 11 years have been worse than 23 years under Ben Ali! Parliament and the government smothered us in poverty, so good riddance to them!” he said.

“Because the Tunisians chose Saied, he has their endorsement to lead the country and do what has to be done. We have confidence in him,” Ouni told AFP.

Sidi Bouzid’s infrastructure has improved and more businesses have opened, but some people still feel marginalised and look to Saied to make their lives better.

Saied, a retired professor and specialist in constitutional law, was elected president in 2019.

On July 25, the president invoked the constitution as he granted himself full powers, having suspended parliament for an initial 30 days.

On August 23, he announced that these measures would continue indefinitely.

“This is necessary surgery to stop the bleeding,” said Abdelhalim Hamdi, a 47-year-old construction worker with a degree in history who has also organized protests in Sidi Bouzid.

“The politicians in power have stolen our dreams and ambitions,” he said, adding that he backed abolishing the constitution because it was “drafted to serve narrow interests”.

Many believe that suspending or repealing the constitution — hailed internationally on its adoption in 2014 — is inevitable.

“It’s a necessary evil to save the country, even if it will probably lead to an authoritarian regime,” said Sami Abdeli, 38.

He was speaking in central Sidi Bouzid, close to the sculpture of Mohamed Bouazizi’s vegetable cart on which is marked the word “Freedom”.

Residents of the town are normally quick to engage in conversation about politics, but many appeared reticent to comment on Saied’s actions.

“We can see that self-censorship is back,” said Mounira Bouazizi, blogger and coordinator at the Sidi Bouzid office of the International Observatory for Media and Human Rights.

“People no longer want to express themselves freely and say what they really think.”

She said that on social networks Saied’s supporters “use violent speech and do not accept any criticism of the president”.

“The idea that one person has all the executive power scares me,” she said. Saied “is vague about his intentions — he hasn’t presented any program”.

“Even if the economic and social situation has become worse and the political class is fragmented, at least we had freedom and democracy,” she added.

President Saied’s move last month was condemned by Ennahdha, the Islamist party that is the largest in parliament, as a coup.

Since then, parliamentarians, magistrates and businessmen have been targeted with travel bans and house arrest in an anti-corruption purge that has raised fears of a decline in freedoms.

“Saied is moving towards an individualist and dictatorial regime. He hears only his own voice,” said Rabeh Zaafouri, who heads the Tunisian Human Rights League office in Sidi Bouzid.

Zaafouri said Tunisians would “never allow a return” to the conditions of before the 2011 revolution.