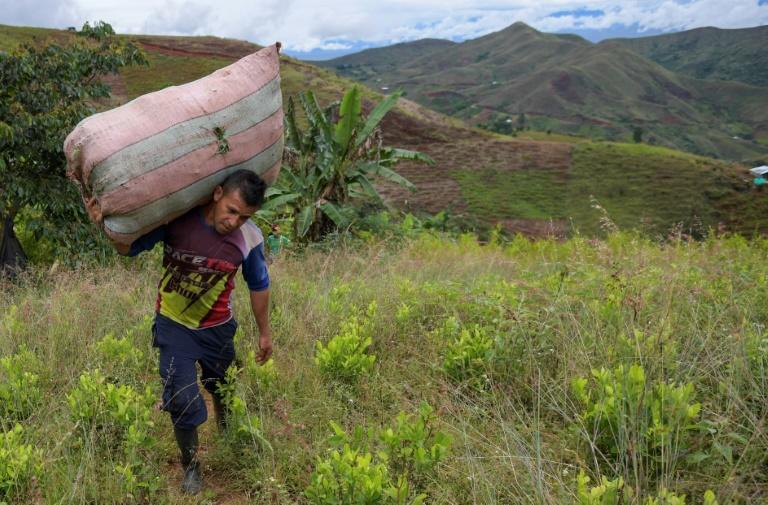 In the mountains and jungles of southwestern Colombia, peasants, migrants and women carrying babies toil doggedly in the coca fields despite the dangers posed by guerrillas and drug traffickers — and despite the government’s anti-drug campaign.

These plantations are known as “San Coca” — Saint Coca — due to the locals’ devotion to growing the plant, which provides the active ingredient in cocaine, and their understanding of all it provides to them in the face of the risks.

Colombia is still the world’s largest producer of the addictive stimulant, even though successive governments in Bogota have worked to combat the trade.

“Coca (plantations) were born as a response to institutional abandonment… and have allowed everyone in these areas to achieve a minimum of dignity,” said Azael Cabrera, the leader of Agropatia, an organization representing 12 rural communities and townships.

“Forget about the state — it doesn’t exist here.”

For community leader Reinaldo Bolanos, “we don’t see ourselves as belonging to this State, as for the State, either we don’t exist or we are a burden.”

For decades, the guerrillas of the Revolutionary Armed Forces of Colombia (FARC) were effectively in charge in Cauca until the historic 2016 peace agreement between the government and the leftist rebels.

In theory, the fighters left the area under disarmament plans, and the peasants expected the state to step into the void, but they never did.

So three years later, dissident guerrillas that opted out of the peace deal moved back in — with new weapons but the same ideology

With no state presence or support, the peasants were left vulnerable and turned to planting coca after suffering losses with other crops including yuca, corn, coffee and sugar cane.

And so the “coca economy” was born: a network of activities around the cultivation and processing of coca leaves which are then used to make cocaine, with rebels serving as the middlemen between the farmers and the traffickers.

The work puts food on the tables of locals, but there is a problem — the government does not distinguish between the coca growers and the drug traffickers.

– Respect for those with guns –

Despite a half-century battle by authorities against the drug trade, the white powder continues to flow freely into the United States and Europe.

During that period, 10 Colombian governments failed to put a dent in the illegal trade, despite millions of dollars in anti-narcotics support from Washington.

In Cauca, the guerrillas reign once again — they are part of the dissident Carlos Patino Front, and billboards and posters bear the face of Patino, a rebel killed in 2013.

Military interventions in the area are “less intense” than in other zones, Defense Minister Diego Molano admits, because of the danger posed to security forces.

“But that doesn’t mean we’re going to let these groups continue with this criminal dynamic,” Molano added.

Nevertheless, the trade — which is lucrative because coca can be harvested four times a year, as opposed to just two for coffee — has grown considerably.

A decade later, that number had nearly tripled to 16,544 hectares.

“The army never came here after the Havana deal. Once again, this area is screwed by illegal armed groups,” said Bolanos.

“We’ve learned to respect whoever has weapons.”

Cabrera chimes in: “The peasants have no authority over the rebels — we can’t tell them to leave, we have no choice but to let them come. But that doesn’t make us guerrillas or drug traffickers.”

Entire families, old women, single mothers with their children, impoverished former city residents and even Venezuelan migrants who walked for months to reach Cauca can be found picking coca leaves in the plantations.

“Students who don’t have classes or are on holidays also come to the fields to pick and so contribute to their studies and to putting food on the table at home,” said community leader Abel Solarte.

While still a minor, Karen Palacios moved from the capital Bogota to Cauca with her partner, a native of the region.

Now 20, she learned to pick leaves before the couple broke up, leaving her as the single mother of two-year-old Dana.

“I used to take her to the plantations and would set up a tent or a hammock so she could sleep while I worked,” said Palacios.

At one point, she was able to put Dana in day care, but then the coronavirus pandemic swept through Colombia, and the center closed, meaning Palacios again must bring her daughter into the fields.

And since the family shoe business succumbed to the ravages of the pandemic, Palacios’s father, stepmother and brother all joined her in Cauca as coca leaf pickers.

Numerous single mothers like Palacios work in the fields.

“Many of us don’t have a husband and we have our children, and if we go picking, we can get them food and clothing,” said Dora Meneses, spokeswoman for a group of 60 pickers.

According to United Nations estimates, between 2016 and 2018, more than 200,000 families — amounting to just over a million people, or two percent of Colombia’s population — were working on coca plantations.

Part of the boom was fueled by one of the peace conditions that included cash payouts for those who agreed to destroy their coca crops.

Experts believe the peasants took this as an incentive to plant more, to earn more from their destruction.

Almost 100,000 families agreed to destroy their crops in return for the compensation and an end to legal proceedings against them, according to official figures.

But in the Patia townships, the business continues to thrive.

Yeison Enriquez fled Venezuela with his wife and three children as their country spiralled into economic meltdown.

He went from viewing coca as an illegal crop to defending the “source of work” that his brother also migrated to Colombia to do.

“We can’t count on this opportunity in the city. In the countryside, there is always work and if they eradicate the coca. I think I will have to migrate once again,” said Enriquez.

In 2017, plantations across Colombia reached a record level of 171,000 hectares.

In 2020, the country managed to reduce the size of its coca plantations to 143,000 hectares but without reducing the amount of cocaine produced — 1,228 tons — which the UN says was due to a better crop yield.

Since the arrival of right-wing President Ivan Duque in 2018, Colombia has increased its eradication of coca crops and the confiscation of drugs — 549 tons in the last 18 months alone.

And controversially, it is preparing to restart aerial glyphosate spraying to eradicate coca crops, which had been suspended since 2015 due to its harmful effects on human health and the environment.

Colombians protest against the use of aerial glyphosate spraying to eradicate coca crops, as the chemical has been shown to have detrimental effects on human health and the environment Raul ARBOLEDA AFP

It is also a major threat to the peasants’ livelihoods.

“We don’t want to sink into misery. We’re organizing resistance — to march, to protest, to strike,” said Solarte.

Antonio Tamayo, 40, a plantation leader, moved to Cauca from Antioquia, 700 kilometers (435 miles) away, after the coca crops there were destroyed.

In the same farm where the leaves are grown, they are shredded and then processed with lime, cement, gasoline and ammonium sulphate to produce the paste that forms the base ingredient for cocaine.

Every week, he says, “intermediaries” for the traffickers collect the hard, whitish paste to take it to clandestine neighboring laboratories where “chemists” transform it into pure cocaine.

The peasants keep out of the most lucrative part of the business — the making and selling of cocaine — but complain that the government lumps them into the same category as the cartels.

“We’re classified as drug traffickers … but others are making the money,” said Cabrera.

What the coca pickers earn is just enough to stave off poverty. A seasoned worker can earn up to $37 a day — more than four and a half times the minimum wage.

– Prosperity on the horizon –

The “San Coca” lands are crisscrossed by dirt roads that can turn into quagmires when heavy rains fall.

Despite this, the traffic is incessant. The trucks authorized by guerrillas pass one after another loaded with fuel, ice cream, bread, clothes and more.

The local “coca economy” has created a community of consumers that pay handsomely for things they used to produce on their own land.

And in urban areas, the coca bonanza has fueled a construction boom, Bolanos says. Roads are being improved and schools are getting more supplies.

“The big difference with coca is that it provides us with the ability to feed ourselves and also allows us to cover what the government doesn’t,” said Bolanos.

But in this mountainous region, everyone fears the return of aerial crop spraying — they recall communities left in ruins, people displaced, homes abandoned, and the death of much of the plant life.

Airplanes first sprayed the herbicide in 1984 before returning in the 1990s and then again in 2008.

“Aerial spraying is practically murder for these towns,” said Bolanos.