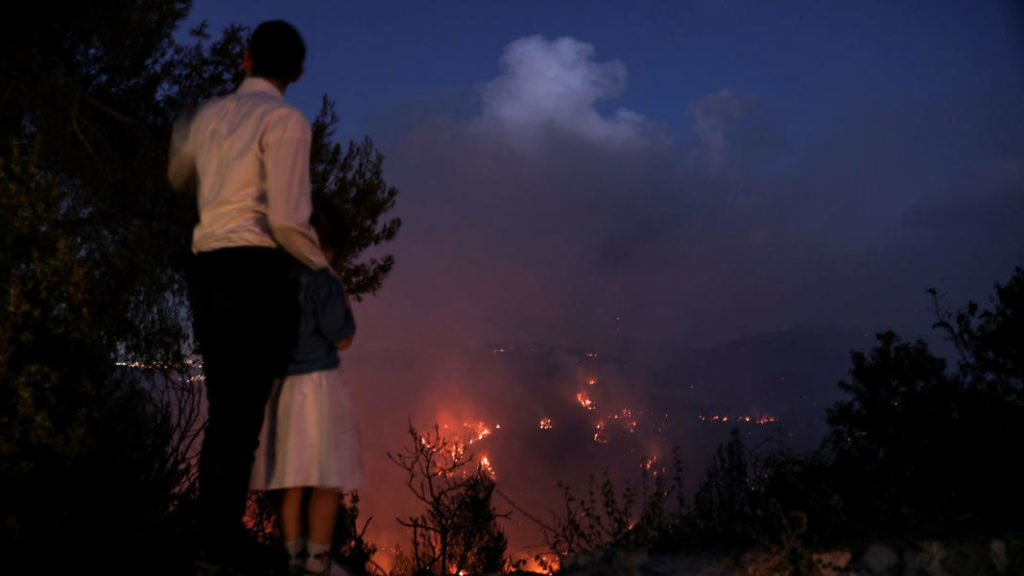 Firefighters supported by firefighting aircraft work to put out a large forest fire, as smoke is visible from much of the city of Jerusalem. The fire threatened the villages of Beit Meir, Shoeva and Ramat Raziel, west of Jerusalem, police said in a statement. A massive wildfire outside of Jerusalem on Sunday sent a thick cloud of smoke over the city as authorities struggled to contain the blaze. The cloud stretched over much of the city covering the skies overhead with a black and orange blanket of smoke. Israeli media said that hundreds of firefighters from across the country were trying to bring the blaze under control. Hot, dry weather and windy conditions were complicating the effort. There were no reports of injuries, but Israeli police said that several communities west of Jerusalem were being evacuated and roads in the area were being closed to traffic. Some refused police orders to leave their houses and tried to battle the fires outside their homes themselves. It was not immediately clear what caused the fire. Yitzhak Ravitz, the mayor of Kyriat Yearim near the affected villages, told public radio his “town’s doors are open … to all families needing protection”. Several other Mediterranean countries have seen forest fires amid soaring temperatures in recent weeks, including Greece, Turkey and Algeria.