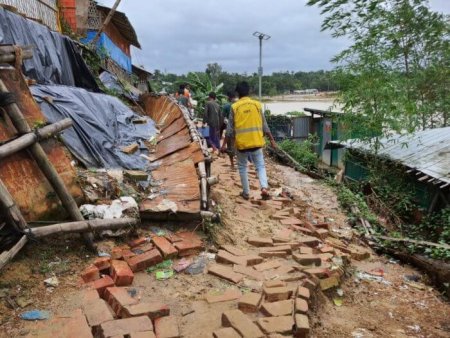 More than 300mm of rain fell in just 24 hours between Monday and Tuesday – nearly half the average for July – and heavy rain continued on Wednesday and Thursday. Six refugees have been killed.

Thousands of people have been made homeless by flooding after monsoon rains inundated refugee sites in southern Bangladesh.

By Hannah Macdonald and Ehsanul Hoque

Heavy monsoon rains had been falling incessantly for days when Meher Khatun, 60, noticed water starting to come into the bamboo and tarpaulin shelter she shares with her son, daughter-in-law and grandchild in a refugee camp in Bangladesh’s Cox’s Bazar District.

Although the shelter had been built at the bottom of a hill, Meher had not seen flooding of this kind in the nearly four years she had been living there after fleeing to Bangladesh from Myanmar.

Within a few hours, the water was up to their chests, and they fled with only their stove, gas cylinder and a solar panel.

“The water was rising so fast that we couldn’t go back.”

“I felt helpless, I didn’t understand where to go,” said Meher. “The water was rising so fast that we couldn’t go back. Most of our belongings were washed away.”

More than 21,000 Rohingya refugees living in the sprawling refugee sites in Cox’s Bazar have been affected by flash floods and landslides in recent days. Over 300mm of rain fell in just 24 hours between Monday and Tuesday – nearly half the monthly rainfall average for July – and heavy rain continued on Wednesday and Thursday. Six refugees have been killed while thousands more, like Meher, have had their homes washed away or flooded.

Now, she and her son’s family are staying in a learning centre a short distance up the hill from their waterlogged shelter, along with about 20 other families displaced by the flooding. Even here, rain drips through the thatched roof and the conditions are barely livable.

Others displaced by the flooding have crammed into shelters belonging to family members or are staying in communal facilities like the learning center.

The floods have come amid a strict national lockdown as Bangladesh battles rising infections and deaths from COVID-19. They also follow huge fires that tore through the camps in March, killing 11 people and destroying thousands of shelters. In a statement on Tuesday, UNHCR said the “adverse weather, latest landslides and floods further exacerbate the suffering and massive humanitarian needs of the Rohingya refugees in Bangladesh”.

Since 2017, when more than 700,000 Rohingya refugees arrived in Cox’s Bazar from Myanmar, reforestation efforts have been ongoing to stabilize hillsides and reduce flooding and landslide risk in the camps. UNHCR and its partners have also trained refugee and host community volunteers to spring into action when disaster strikes. This week, these volunteers have been working day and night to help move people to safety from flooded or collapsing shelters. But Bangladesh is one of the countries that is most prone to climate change and the tropical storms that have always accompanied the monsoon season are becoming more frequent and intense.

“I haven’t seen such a flood before,” said Meher. “In Myanmar, I lived in a place where the land was even, and it didn’t flood in monsoon.”

She is worried about her shelter “and everything we left under the water”.

“We’re not sure when the rain will stop and we’ll be able to go back to our homes.”