l miss Ghana League, I would play in GPL again before I retire from professional football – Anthony Annan 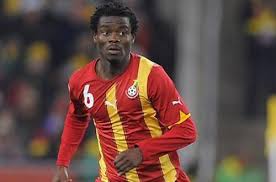 Former Accra Hearts Of Oak midfielder Anthony Annan has shown his desire of returning to the Ghana’s topflight league, saying there are numerous positives in the league as compared to his days.

Annan on Takoradi-based Skyy power fm, spoke about his time playing in the Ghana League

“It was difficult in our time at Secondi Hasaacas football club, we were facing many challenges, sometimes half or no salary at the end of the month”.

“Uncle Nab was the chairman then, we all know Hasaacas is not a rich club but i still fought hard to get to the highest level”.

Pablo Aimar on his transfer from Hasaacas football club.

“My move from Hasaacas was to join Asante Kotoko but Heart of Oak came in and I was called to come to Accra.

“Seriously, there has been a lot of changes in the Ghana League, I think it is far better than our time now”.

“I watched the superclash between Hearts of Oak and Asante Kotoko game, it was indeed a superclash and I wish I was playing in that game.

“I missed Ghana football, the fans, the media and the hype around it”.

Anthony Annan who is playing for Finland side FC inter Turku would not retire from professional football anytime soon.

“I don’t know when am retiring from football I will definitely play in the Ghana Premier League again before I hang my boots”.