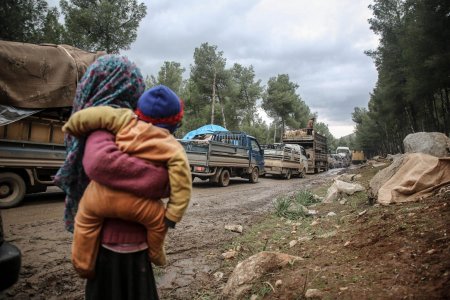 Girls who spoke to Save the Children said child marriage laws, if they exist at all, were unlikely to protect them because they are rarely enforced. Stronger enforcement was vital, they said.

Girls in the Middle East and North Africa are in greater danger of being forced or sold into ‘tourist’ or ‘pleasure’ marriages due to the surge in poverty, displacement, and the COVID-19 pandemic, Save the Children warned ahead of a global meeting next week on gender equality.

Ahead of the Generation Equality Forum in Paris, Save the Children said the compounded crises meant some parents felt they had no option but to accept marriage proposals for their daughters, including temporary unions between young girls and older men, some of which last just a few weeks and are arranged in exchange for money.

Loopholes in laws against child marriages in countries including Lebanon, Egypt, Turkey and Iraq are exposing children to a broad range of protection risks. In some contexts, this is enabling exploitation of girls through temporary marriages, the aid agency said. Time-bound ‘summer’, ‘tourist’, or ‘pleasure’ marriages are a form of violence and a breach of girls’ rights with lifelong consequences for their safety and education.

The exploitative practices are exposed in Save the Children’s new report, ‘Married by Exception: Child marriage policies in MENA’ released today. Seventy-five girls interviewed for the report said COVID-19, poverty and displacement were the main factors contributing to a worsening of the situation.

In Iraq, so-called religious-based ‘pleasure’ marriages condemn girls to marriage, often to older men, for short periods of time.[i] Similarly, in Egypt, ‘summer’ or ‘tourist’ marriages see girls forced to marry foreign men who travel into the country for this purpose[ii]. In spite of different laws limiting the practice, exceptions and loopholes allow temporary child marriage to take place. For example, marriages based on religion are prohibited without referring to court in Iraq but still happen if a small fine is paid. In Turkish law, the minimum age for marriage is 18, but children can marry aged 16 with court authorisation in “exceptional circumstances”.

Najwa*, a teenage Syrian refugee in Egypt said: “I had the experience [of being asked to marry] when I was 14 years old. Someone came to my family asking for marriage but my family did not accept his proposal. But I was thinking they might accept it. And this thought affected me, my education and plans. It also affected my relationship with my family and even with my friends, I became depressed because I did not want to marry this man.” Exploitative marriages have also taken place within Syrian refugee communities in the region where desperate parents said they were left with little choice but to ‘sell’ their daughters into marriages or agree to short-term marriages in return for money.

In Lebanon, Syrian refugees reported that child marriages were happening more quickly out of financial urgency or because girls were out of school, and were often arranged by unregistered Sheikhs and clergymen amid an absence of a civil law banning child marriage.[iii]

Girls who spoke to Save the Children said child marriage laws, if they exist at all, were unlikely to protect them because they are rarely enforced [iv]. They said stronger enforcement, through imposing fines and jail terms on those found to play a role was needed.

Jeremy Stoner, Save the Children’s Director for the Middle East and Eastern Europe, said:

“Although this is not the first time we have heard such horrific instances of exploitative commercial marriages, there is an unmistakable trend in this region. Such practices not only expose girls to sexual exploitation, violence and trafficking, but they also deny their right to education and future opportunities. Their communities view them as outcasts and for many, the only way to survive is to marry again. It becomes a life lived in fear, anxiety and shame.

“The exceptions provided by loopholes in child marriage laws are becoming the rule, and that rule is destroying thousands of futures across the Middle East and North Africa.

“As world leaders meet in Paris to make commitments on gender equality, they must remember that what they do today will shape the futures of girls like those we spoke to. Countries in the MENA region taking part in this summit must remove all exceptions to the legal age of marriage.”

Save the Children is calling on the governments of Lebanon, Egypt, Turkey and Iraq to set the minimum age of marriage to at least 18 years and remove any exceptions to this rule. Registration must be compulsory for all marriages, whether civil, religious or customary.