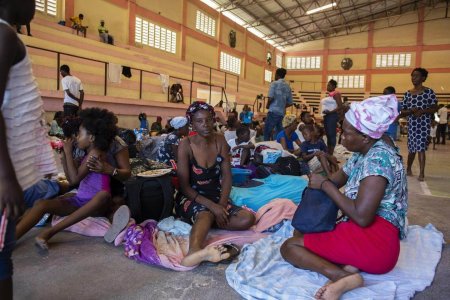 This latest spike in displacement is in addition to 3,400 people already displaced by criminal violence in Haiti over the past nine months, bringing the total number of displaced to about 17,000.

An estimated 13,600 people have fled their homes in Port-au-Prince since 1 June to escape clashes between rival gangs.

Civilians have been threatened, injured, sexually assaulted or killed, and homes have been looted and burned, according to OCHA and local partners. Humanitarian access is a serious challenge and assistance continues to be delayed by ongoing shootings and roadblocks, which have paralyzed the economy, interrupted movement and restricted essential supplies of food, medicine and fuel. There are reports of wounded people dying because they could not get to the hospital.

“This escalation in criminal violence and displacement in Haiti follows an upward trend we have been monitoring for several years,” said the director of the Internal Displacement Monitoring Centre, Alexandra Bilak, “but it is on a scale we never imagined.”

IDMC recorded 7,900 new displacements in the whole of 2020 which, at the time, was unprecedented. The majority took place in Port-au-Prince, with smaller movements forced by gang violence in Saint Louis Du Nord (Nord-Ouest) and Cap-Haitien (Nord).

This latest spike in displacement is in addition to 3,400 people already displaced by criminal violence in Haiti over the past nine months, bringing the total number of internally displaced people (IDPs) to around 17,000. Of these, some 3,000 are sheltering in organized sites, while 2,500 have sought refuge in spontaneous sites with ‘extremely limited assistance’. Another 11,500 have yet to be located but are thought to be either trapped in conflict zones or living with host families.

Displacement in 2021 has, so far, been concentrated in the Port-au-Prince metropolitan area. Other parts of the country, notably the Southern Peninsula, have also been affected by the surge in violence, which has caused disruptions to the flow of goods. However, displacement has not yet been reported there.

In the Capital, armed groups have attacked businesses, stealing food and other supplies, and burned down a camp hosting hundreds of people with disabilities who found refuge there following the 2010 earthquake. They have been relocated to Pétion-Ville municipal school in overcrowded and unsanitary conditions, threatening the spread of Covid-19. With hospitals over-run and the arrival of new variants of the virus, infection and fatality rates have risen in the last month. The pandemic has also aggravated the country’s high levels of food insecurity and inflation rates.

Stability in Haiti is likely to deteriorate in the coming weeks with gangs expected to fight back to regain territorial control. The Caribbean hurricane season, which started on 1 June, also increases the risk of further displacement. In 2020, IDMC recorded 13,000 displacements due to disasters in the country, mostly linked to hurricanes Isaias and Laura.

“People already uprooted by violence will be especially vulnerable to extreme weather events, such as hurricanes. It is imperative that they receive urgent assistance before the next disaster strikes,” said Alexandra Bilak.