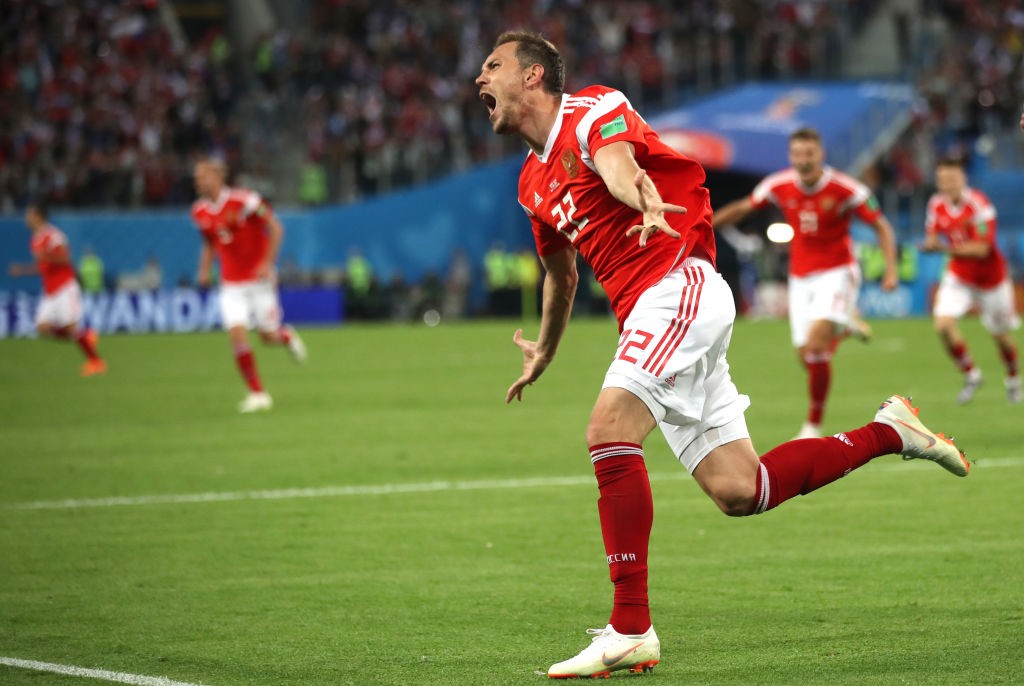 Russia will be hoping to book their place in the knockout stages of the UEFA Euro 2020 when they take on Denmark in their final Group B clash on Monday.

With the final round of fixtures set to be played out in the group stages of the UEFA Euro 2020, there is still plenty at stake in Group B with the second place still up for grabs. And Russia, who are the current occupants of the position, will be hoping to advance to the knockout stages without any hiccups when they take on Denmark at the Parken Stadium on Monday night.

Russia started the tournament on a poor note, losing to Belgium in their opening fixture. However, Stanislav Cherchesov’s side secured a 1-0 win over Finland last time out thanks to Aleksei Miranchuk’s goal, which has put them in a strong position with regard to qualification for the knockouts. Should the Finns lose to Belgium in the other Group B fixture, Russia will pretty much be guaranteed a spot in the next round.

As for Denmark, the tournament has been shrouded by the unfortunate incident involving Christian Eriksen during their opening game against Finland. Kasper Hjulmand’s side may have lost both their games to the Finns (1-0) and Belgium (2-1) and be sitting at the bottom of the pile, but they deserve credit to have stepped out and given their all after everything that had happened.

Despite not having collected a single point yet, the Danes can still make it through to the knockouts should they defeat Russia and Finland lose heavily to Belgium or third in case the former pick up a win.

The last time Denmark and Russia clashed was in a friendly encounter back in 2012, which the latter had won 2-0. Ahead of this crucial match-up that has a lot riding on it, The Hard Tackle takes a closer look at both teams.

Yuri Zhirkov has been ruled out of the tournament with a thigh injury while Mario Fernandes is also unlikely to be involved after he suffered a spinal injury last time out, although he has been cleared. Russia manager Stanislav Cherchesov will stick to the 3-5-1-1 formation and look to put men behind the ball to frustrate their opposition before trying to hit them on the break.

Anton Shunin ought to be the man guarding the goal for Russia, where he will be shielded by the three-man defensive unit comprising Igor Diveev, Andrei Semyonov and Georgi Dzhikiya. Vyacheslav Karavayev and Daler Kuzyayev should be the two wing-backs, who will be in charge of providing the width going forward for the Russians and supplying the crosses into the box for the strikers to attack.

Finally, star striker Artem Dzyuba will be the target man in the attack for Cherchesov’s side with Aleksei Miranchuk, the match-winner against Finland, playing off of him to try and exploit any spaces in the final third.

Christian Eriksen is the only absentee for Denmark heading into their final game of the UEFA Euro 2020 Group B. Manager Kasper Hjulmand could decide to stick with the three-man backline yet again on Monday after the team looked good in the game against Belgium last time out.

Kasper Schmeichel will guard the goal for the Danes at the Parken Stadium, with the Leicester City captain being protected by the three-pronged defence of Andreas Christensen, captain Simon Kjaer and Jannik Vestergaard, while Joachim Andersen is also an option.

Daniel Wass is a certainty to feature as the right wing-back while Joakim Maehle should continue out on the left, with the onus of providing the width during the attacking phases largely relying on the duo. Tottenham enforcer Pierre-Emile Hojbjerg should start as one of the two central midfielders looking to cut out the influence of the dangerous Aleksandr Golovin. He will be supported by the equally solid and disciplined Thomas Delaney.

Moving into the final third of the pitch, Barcelona forward Martin Braithwaite and youngster Mikkel Damsgaard, who looked lively in the Belgium clash, will slot in as the two attacking midfielders trying to cause problems to the Russian defence with their speed and clever movement. Yussuf Poulsen, who scored the only goal of the game for Denmark against Belgium, should once again lead the attack. 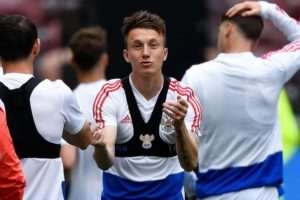 Despite their position, Russia will be pushing for a victory on Monday so that their fate is in their own hands and don’t depend on the outcome of the game between Finland and Belgium. And in order to ensure three points against Denmark, the Russians will need star man Aleksandr Golovin to step up.

While he has shown glimpses of his quality and ability, the 25-year-old is yet to make the impact expected of him. And, no better occasion than Monday, when he can fire his team into the next phase of the Euro 2020 and get into the groove himself for the upcoming fixtures. 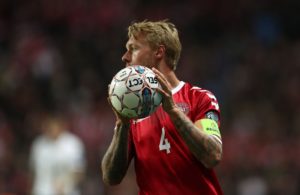 The Denmark captain has been in the news for his awareness and handling of the Christian Eriksen situation when he showed great leadership. More of the same will be needed on Monday if his side are to stand a chance of making it through the next round.

Russia may not be the most fluid attacking teams but in Artem Dzyuba, they have a potent goalscorer who can punish any team on his day. So, the onus will be on Kjaer to make sure that the big man from Russia has a quiet evening while keeping things tight and organised at the back to allow the forward players to push in search of goals.

Denmark showed good spirit and put up a good display against Belgium even if they ended up losing. Russia, meanwhile, do not really possess the quality or the attacking verve on a similar level as Belgium, so the Danes are certainly in with a chance on Monday night. However, their own attack hasn’t been at their best eithrer.

So, we can expect a close contest that ends in a scored draw, which should send Denmark out of the tournament while Russia will have to wait for the result of the other Group B game to learn their fate.