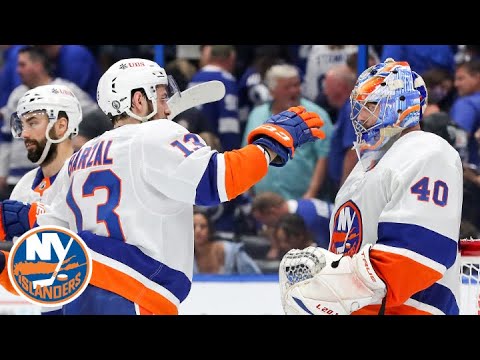 Brayden Point scored the eventual winner late in the second period as the Tampa Bay Lightning improved to 6-1 on the road with a 2-1 victory over the New York Islanders in game three of their NHL semi-final series.

Andrei Vasilevskiy stopped 27 shots and Yanni Gourde also scored for the defending Stanley Cup champion Lightning, who have a two games to one lead after winning in front of a crowd of 13,700 at Nassau Coliseum on Thursday night.

After dropping the series opener at home, the Lightning last Tuesday evened the series at a game apiece, when Tampa Bay scored three unanswered goals in a span of just over 16 minutes of play bridging the second and third periods in a 4-2 victory.

The Lightning have been especially good away from home during the playoffs. They went 16-6 on the road en route to winning the NHL championship last summer.

Point scored with just 20 seconds left in the second to snap the 1-1 tie. Gourde opened the scoring halfway through the first period when he snuck a sharp angle shot by Isles goaltender Semyon Varlamov.

Cal Clutterbuck scored the lone goal for the Islanders at 17:01 of the second to tie it 1-1, finding the puck during a frantic scramble in front of Vasilevskiy and tapping it home.