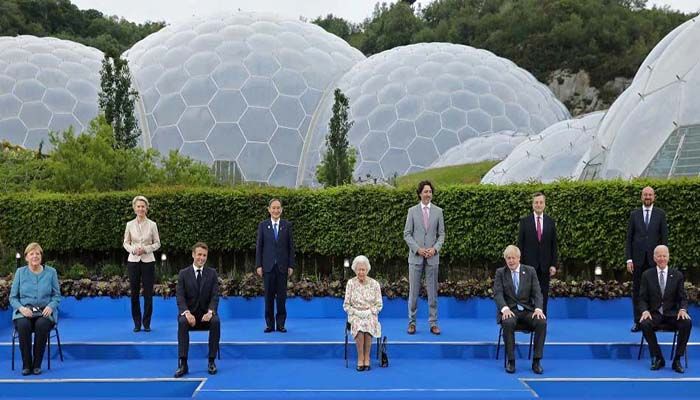 On the second day of the G7 summit, world leaders are expected to make big announcements on preventing future global health crises and tackling China’s expansionist Belt and Road initiative.

Several talks taking place on the sidelines of the G7

The EU and UK are locked in an escalating diplomatic row over Northern Ireland, the only part of the UK that has a land border with the bloc.

The EU is angry at British delay in implementing new checks on some goods coming into Northern Ireland from the rest of the UK required under the terms of Britain’s divorce from the bloc.

Von der Leyen tweeted after meeting Johnson that Northern Ireland peace was “paramount,” and the binding Brexit agreement protected it.

“We want the best possible relations with the UK. Both sides must implement what we agreed on. There is complete EU unity on this,” she said.

In addition to the ongoing Brexit row, Merkel and Johnson discussed a number of foreign policy issues, including China and what the UK government termed Russia’s “destabilizing activities.”

G7 to announce rival to China’s Belt and Road Initiative

During the summit, the G7 is expected to launch a new global infrastructure plan to counter China’s massive Belt and Road Initiative, according to senior US officials.

“We’ll be announcing ‘build back better for the world,’ an ambitious new global infrastructure initiative with our G7 partners that won’t just be an alternative to the B and I [Belt and Road],” an official was quoted as saying by news agency Reuters.

China’s Belt and Road Initiative is a multi-trillion dollar infrastructure project launched in 2013 with the aim of boosting trade links with dozens of countries from Asia to Europe.

Critics of the initiative say that Chinese lending for Belt and Road projects could entice developing nations into taking on massive, unsustainable debt, thereby making them vulnerable to influence by Beijing.

“This is not just about confronting or taking on China,” a senior White House official said, adding: “This is about providing an affirmative, positive alternative vision for the world.”

Group of Seven (G7) leaders are set to sign up for the Carbis Bay Declaration aimed at taking steps to prevent another health emergency, similar to the coronavirus pandemic.

The heads of seven leading economies — Britain, Canada, France, Germany, Italy, Japan and the United States — are in Cornwall in the UK for the second of three days of talks.

By signing the declaration on health, G7 leaders will commit to using all their resources to prevent a global pandemic from ever happening again, according to a statement released by the UK government on Saturday.

The declaration is set to lay out “concrete commitments to prevent any repeat of the human and economic devastation wreaked by coronavirus,” the statement adds.

The steps include cutting down the time it takes to develop and license vaccines, treatments and diagnostics for any future disease to under 100 days. It will also reinforce global surveillance networks. The declaration —named after the seaside town in Cornwall, southwest England where leaders are meeting — will be formally published on Sunday, alongside the G7’s final communique.

The respiratory virus has caused millions of deaths since the outbreak was first reported in China in late 2019. It forced economies worldwide into recessions as a result of strict measures on businesses and trade imposed by governments in a bid to stem the spread of the outbreak.