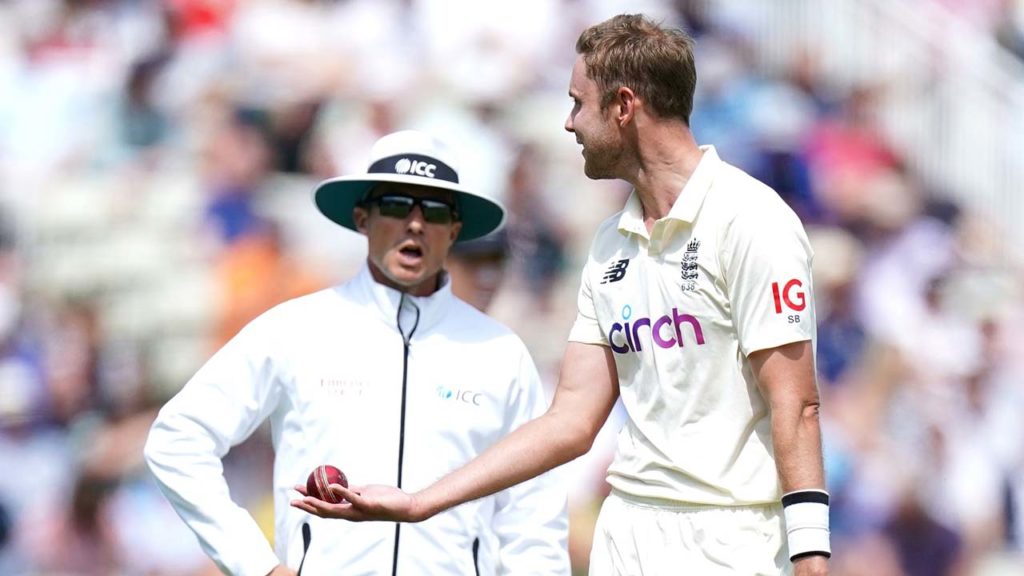 England great Stuart Broad has urged cricket chiefs to “do away now” with the soft signal after feeling he had been denied a wicket by the current Decision Review System in the ongoing second Test against New Zealand.

Broad thought he had Devon Conway caught low in the slips by Zak Crawley for 22 on Friday’s second day at Edgbaston.

There was enough doubt, however, for third umpire Michael Gough to be called in by his colleagues.

And when standing umpire Richard Kettleborough gave a ‘soft signal’ of not out, England’s hopes of seeing off Conway right then faded.

Gough duly ruled Conway not out and he went on to make 80 before New Zealand ended the day on 229-3, 74 runs behind England’s first innings 303.

Broad, with the aid of a Crawley catch at deep square leg, eventually dismissed Conway but was still clearly rankled not to get him earlier on.

“You can see from our reaction on the field that we thought it was out,” Broad told Sky Sports before play on Saturday.

“Zac thought he had his fingers under the ball. You only have to look at Joe Root’s reaction at first slip and (wicket-keeper James) Bracey’s reaction behind the stumps — who are a yard away from it — to know that that ball has carried.”

Nevertheless Broad, perhaps anxious to avoid disciplinary action from his father Chris, the ICC match referee for this Test, added he sympathised with the “really difficult situation” the umpires found themselves in with the soft signal.

“It’s not the umpires’ fault that they’re 40 yards away with maybe an obscured view.

“You’re going upstairs because you’re not sure whether it’s carried or not.

“Then the third umpire’s hands are tied a little bit with whatever that on-field call is.”

“I don’t really see the point of waiting for another ICC meeting in September or wherever it comes to discuss what’s going on in the game,” he said. “Let’s just do away with it now.

“The ICC should just come out and say ‘the soft signal is gone’. If the umpires are unsure, let’s go through the amazing technology we’ve got and get the right decision.”