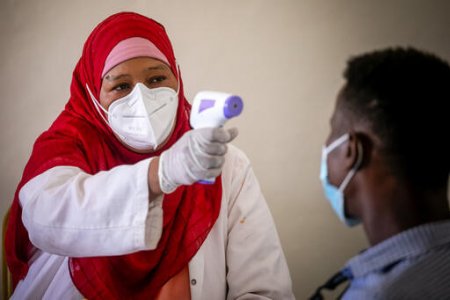 At least 300 million doses are needed to vaccinate priority groups, which comprise 20% of the Region’s population. Only 57 million vaccines doses have been given, with inequities in vaccine rollout.

Almost 6 months into 2021, the Eastern Mediterranean Region is still far from vaccinating 20% of each country’s population, the initial goal that WHO had set for 2021.

Only 2 out of 22 countries in the Region have administered at least 1 dose of vaccine to over 50% of their populations. Most of the other countries have vaccinated less than one percent and are behind in vaccinating even health care workers, the top priority group.

At least 300 million doses are needed to vaccinate priority groups that make up 20% of the Region’s population. To date, however, only 57 million vaccines doses have been given across the Region, with serious inequities in vaccine rollout between wealthier countries and poorer countries.

Low rates in COVID-19 vaccine rollout in the Region is attributed to different factors, mostly major inequalities in the capacity to buy vaccines and shortages in supply amid high levels of demand. Other issues can further contribute, including public hesitancy against vaccines and logistics related to cold chain storage of some vaccines. In countries facing emergencies, there are also challenges related to accessing people living in hard-to-reach areas, those affected by ongoing armed conflict or those living across divided territories.

“Vaccines are a key tool in ending this pandemic. In some countries in other regions, we have seen infections rates start to slowly decrease as mass vaccination campaigns are rolled out. But we need to access much larger quantities of vaccine and to see more coordination across various sectors, as well as better engagement of communities to increase vaccine acceptance,” said Dr Al-Mandhari, WHO Regional Director for the Mediterranean Region.

WHO urges countries in the Region to expand and accelerate vaccination campaigns, increase the number of vaccination sites, and prepare to use the additional doses that will be made available through the COVAX Facility. The plans made to vaccinate those living in hard-to-reach areas need to be implemented.

WHO’s Regional Office for the Eastern Mediterranean works with countries a daily basis and provides technical support, as needed. WHO also tracks vaccine use and regulations. WHO is also in close collaboration with ministries of health to follow up on people experiencing side-effects after vaccination. Work with countries also aims at boosting awareness about vaccine uptake and addressing rumors and misinformation that play a key role in vaccine hesitancy.

Through the COVAX Facility, WHO’s Regional Office works to reduce inequities in vaccine rollout. Several countries have now received additional shipments of COVID-19 vaccines. Through COVAX, WHO hope to provide an additional 28.41 million doses by the end of June 2021 and to reach 340 million doses by the end of the year in countries in the Region.

“We call on countries and partners for more collaborative response, and to ensure that vaccines are rolled out quickly, widely, and equitably. Let’s use this crisis to bring out the best in our response as an Organization and countries. The pandemic is still far from over,” said Dr Ahmed Al-Mandhari, WHO’s Regional Director.