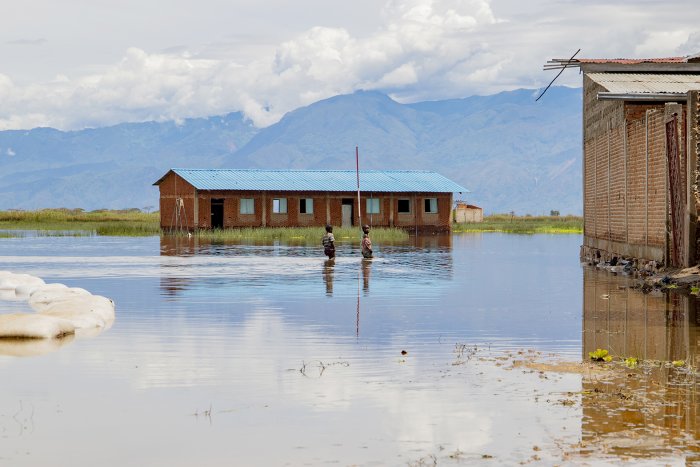 Local authorities have confirmed 5,152 families have been affected and displaced by the floods since last week. IOM Burundi has provided non-food items as a first step in the emergency response.

The International Organization for Migration (IOM) and humanitarian partners distributed emergency aid to newly displaced households due to new floods caused by the constant rise of Lake Tanganyika and the Rusizi River.

The recent floods have caused further displacement of people and destruction of property. Coordinated by the Directorate General of Civil Protection and Risk Prevention and Disaster, and the local administration, this aid is intended for those who have been most affected and are in the sites of Sobel and Kinyinya II.

Local authorities have confirmed that 5,152 families have been affected and displaced by the floods since last week. IOM Burundi has provided non-food items (NFI) as a first step in the emergency response.

On Saturday 23 May, IOM facilitated the transportation of 254 families from Gatumba and Rukaramu to the Sobel site and has already assisted 383 displaced families in the same site with blankets, soap, tarpaulins and jerry cans. This support has been made possible through the support of the European Union in Burundi and the Federal Republic of Germany.

IOM will assist the most vulnerable people from Gatumba who are currently in the Sobel and Kinyinya II sites by providing 1,000 NFI kits and 1,794 tarpaulins. World Vision International will also distribute 400 NFI kits. This is in addition to other initiatives by United Nations (UN) agencies and non-governmental organizations, coordinated by the UN Office for the Coordination of Humanitarian Affairs with the Ministry of National Solidarity, Human Rights and Gender and the Ministry of Interior, Community Development and Public Security.

Despite the emergency response currently being mobilized, many people in need cannot be assisted due to limited resources. “We don’t have enough stocks to respond to people’s urgent needs. We need to be able to help more with shelter and non-food items. The humanitarian community as a whole does not possess enough resources to respond to this growing humanitarian emergency which needs considerably more support”, says Michael ASIMA, IOM Burundi’s Emergency and Preparedness Coordinator.

Thousands of people have been forced to leave their flooded homes in the last weeks after the lake’s water level, which began to rise over a year ago, reached a tipping point due to unusually heavy rainfall across the sub-region in border countries such as the United Republic of Tanzania and the Democratic Republic of the Congo.

Many of them still have nowhere to go, while others are temporarily sheltered elsewhere by families or neighbors or in empty buildings. During previous floods, Gatumba was among the most affected areas. Now, most of Burundi’s coastal provinces are seriously affected.