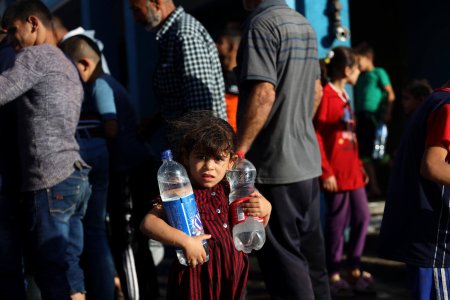 Oxfam warns that 400,000 people in Gaza do not have access to a regular clean water supply after bombing hit electricity and water services and severely affected the three main desalination plants.

Four hundred thousand people in Gaza – almost a fifth of the population – do not have access to a regular clean water supply after 11 days of bombardment devastated electricity and water services and severely affected the three main desalination plants in Gaza city, Oxfam warned today.

All of Gaza’s 2.1 million people have been affected by Israel’s bombing that took 240 lives, destroyed or damaged 258 buildings containing nearly 1,042 homes and commercial offices, and devastated vital public services. Around 100,000 Palestinians were displaced by the bombing and are attempting to return home. Even if their homes are still standing, life will not be normal.

“Gaza is largely dependent upon fuel for its electricity, including to pump clean water from wells into homes. With the disruption in the supply causing a shortage of fuel, hundreds of thousands of people in Gaza will soon have no access to basic hygiene.

“Water is doubly important, during this critical phase of the Coronavirus pandemic, to help people limit the spread of COVID-19. Six hospitals and 11 clinics have also been damaged including the only COVID-19 laboratory in Gaza.”

Gaza and the West Bank have already recorded more than 330,000 COVID-19 cases and more than 3,700 people have died due to the virus.

Vital businesses and fishing have also been affected. Stevenson said:

“Electricity cuts and the destruction of office buildings have forced many small businesses to come to a halt. Israel’s authorities have stopped the bombing but are now restricting fuel deliveries. They have also closed most of the Gaza fishing zone, meaning nearly 3,600 fishermen have now lost their daily income and food.

Even before the recent hostilities, the average daily consumption of water was just 88 litres per capita – far below the global minimum requirement of 100 litres. Amal, a mother in Northern Gaza told Oxfam: “We [now] only get four hours of electricity a day, and we don’t have a schedule for it. Water might be available for one hour, but we won’t have electricity to pump the water to the roof tank. We stay up all night looking for water to fill plastic buckets”.

Oxfam is working with partners to provide people with immediate lifesaving clean water, hygiene kits and cash to help people buy food and their essentials, and to restore destroyed water systems. The international agency aims to help an additional 282,000 people and needs £2.2m to ramp up its humanitarian assistance in Gaza.

Stevenson said: “Meeting people’s immediate humanitarian needs is critical now. But Gaza cannot rebuild without addressing the root causes of the conflict. The cycle of war means any humanitarian effort now could be lost again tomorrow. The international community must ensure concrete political action to bring an end to the occupation and the ongoing blockade of the Gaza Strip.”