We are ready for Hearts, we will beat them hands-down – Charles Mensah 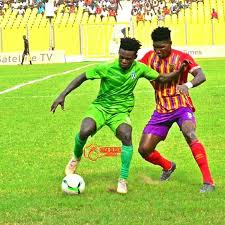 Bechem United’s winger, Charles Mensah says they are ready to beat Accra Hearts Of Oak as Bechem hosts the “contnental club masters” for GPLWK24 at the Nana Fosu Gyeabour (ii) park this afternoon.

Mensah admitted Hearts Of Oak is in a very good form but optimistic his side, Bechem is much prepared to defeatthe phobians.

“The worst result for Bechem should be a draw, and that is our last expectation going into the game”.

“Playing against Hearts is a huge task as an opposition player because of their character abd even their name”.

“I’m confident of winning the game because we need these points badly”.

“Hearts will do everything possible but their best can be draw”.