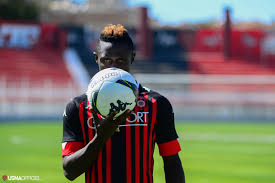 Former Kumasi “Krobea” Asante Kotoko goal machine, Kwame Opoku has said if the Club would “trust and support” Francis Andy Kumi as they did for him, he’ll give the team more goals.

The Ghana’s Senior national team and USM Alger striker, Kwame Opoku “Bayie9” in an interview with Kumasi Fm praised his former team-mates for their splendid performances in the the ongoing Ghana premier league.

Opoku scored seven goals in the Ghana premier league for the Porcupine Warriors before moving to USM Alger in Algeria.

The in-form centre forward had a joyous weekend with USMA as he scored on his debut for the Algerian giants.

Kwame Opoku was so much grateful for the platform his former club, Kumasi Asante Kotoko gave him and urged the porcupine warriors supporters to give Francis Andy Kumi the same support and trust they had for him.

“I’m here because of the platform Kotoko gave me”. 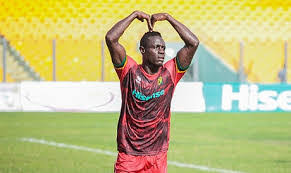 ” I am really grateful to the management, technical team, my former team-mates and the supporters for the love they shown me”.

“Kumi is equally good as me, his movement with and without the ball is amazing”.

“If kotoko can give him the same support and trust they did to me, he’ll give them a lot of goals” . He said..

“If they will continue to play this way, they’ll land the trophy with an ease”.

“The love I have for Kotoko is imaginable”.

“When Kotoko is playing I hardly sleep or sit, always checking on my phone for scores till the game end”.

“I am happy here in Algeria and I wish them well”.

Francis Andy kumi has scored three goals for Asante Kotoko since he joined.