Swedru based division one side “All Blacks supporters are not happy with the results and the position of their beloved club for the ongoing national division one league but are hopful not be relegated to the second division of Ghana football.

All Blacks is seen 14th on the standing of Division one league, Zone two with just 18 points as at week 19.

The former Ghana premier league side supporters’ chairman in a interview with your most reliable news portal amnewsworld.com was so confident and optimistic his team will clib up from the relegaition zone and fight for premier league qualification in the subsequent season.

“We are struggling this season but things shall change for better”

“It’s sad to see All Blacks battling to avoid relegation but I am confident the team will surely stay in the league because we have at least ten to eleven more matches to play”.

“We will never be relegated, never!”

“We will move from here (relegation zone) to at least 6th before the season ends, we are All Blacks” he assured..

“I will say it’s hard luck and nothing else, some matches we deserve to win hands down, then it ends in a drawn game and sometimes in a painful defeat”.

“Every department of the team ie playing body, technical team and the management are doing extremely well but the results are not coming in our favor”.

“The only problem was our headcoaches, the team had sacked three already but we believe coach Miquel will help secure us a very good position”.

“Gamba Osaka” All Blacks will host Secondi Hasaccas at Swedru Stadium for thier crunch week20 game. 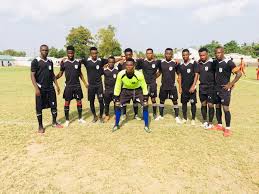