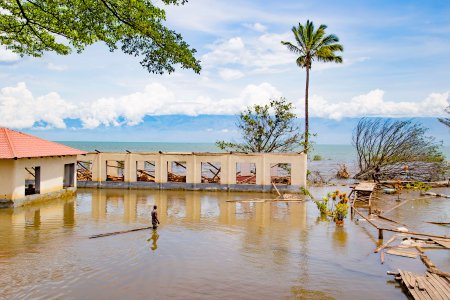 More than 30,000 people have been hit by flooding across Burundi’s coast due to the rising waters of Lake Tanganyika. Villages on the shores of Rukaramu and Gatumba zones are among the hardest hit.

More than 30,000 people have been affected by flooding across Burundi’s coast due to the rising waters of Lake Tanganyika. An assessment by the International Organization for Migration (IOM) Displacement Tracking Matrix (DTM) reveals that local villages on the shores of Rukaramu and Gatumba zones, in Mutimbuzi commune (Bujumbura Rural province) are among the hardest hit.

Thousands of families have been forced to leave their flooded homes in the last week. Most of the 6,239 households, including 5,208 from Gatumba and 1,121 from Rukaramu, are being sheltered either by host families or in houses under construction and at collective centres. Some families remain in their homes despite being partially submerged.

“They don’t know where to go. Some try to get the water out using bowls and pans, whatever they have.
People have spread out in the area so it can be very difficult to collect data quickly,” said Innocent Kwizera, IOM’s DTM focal point from the Burundian Red Cross.

The situation is likely to worsen as the number of affected people continues to grow along with the lake’s water level which began to rise gradually over a year ago and reached a tipping point for many coastal villages over the last week. IOM in collaboration with the local administration, have deployed a team made up of mainly Red Cross Volunteers throughout the area to collect data to find out how many are affected and some of the most urgent needs.

Host families whose resources are already strained run the risk of falling into the vulnerable category, thereby increasing critical humanitarian needs. Most of Gatumba and Rukaramu’s affected inhabitants are farmers or fishers who have lost their food stocks for the year and whose essential field crops are now destroyed.

According to the Geographic Institute of Burundi, the cause of Lake Tanganyika rising is two-fold; unseasonal heavy rainfall across the sub-region in countries bordering the Lake (such as Rwanda, the United Republic of Tanzania and the Democratic Republic of the Congo), and the Lukuga river that is overflowing – a tributary of the Lualaba River in the DRC that is normally an outlet for the Lake. According to meteorological projections, the rains are expected to continue until mid-May.

Gatumba is already under considerable strain. Around the same time last year, torrential rains caused the banks of the Rusizi river to overflow, causing a similar flooding emergency that affected roughly 50,000 people. Nearly 20,000 of the most vulnerable displaced persons were given shelter in four displacement sites in the area. Although these camps are currently being decommissioned by the Government of Burundi with help from partners, IOM anticipates additional localized emergencies – further to last week’s – which will perpetuate urgent needs.

“This emergency is unprecedented for Burundi. We must act now to urgently respond to the most basic needs of the most vulnerable people – such as safe shelter, clean water and protection,” says Vijaya Souri, IOM’s Chief of Mission for Burundi.