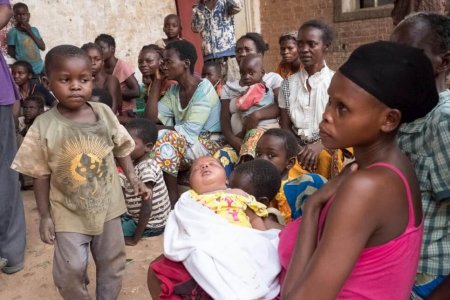 According to local authorities, an estimated 21,000 people, mainly women and children, have been displaced since 28 March by clashes between Luba and Kuba ethnic groups in Kasai’s Bakwakenge locality.

UNHCR, the UN Refugee Agency, is alarmed by a resurgence of violence in the Democratic Republic of the Congo’s Great Kasai Region, that has already displaced thousands of civilians.

According to local authorities, an estimated 21,000 Congolese – mainly women and children – have been displaced since 28 March by clashes between Luba and Kuba ethnic groups in Kasai’s Bakwakenge locality.

There have also been reports of at least 13 people being killed, many left injured and 190 houses burnt to the ground.

The Kasai Region has been recovering from violence in 2017 that displaced 1.4 million people within the DRC and forced 35,000 refugees to seek safety in Angola.

UNHCR is calling for a renewed focus on restoring peace and defusing tensions in Kasai to prevent another wave of mass displacement in the country.

Tensions between two communities are reported to have been on the rise since August 2020 due to land disputes. Attacks and counter attacks last year displaced more than 13,000 families – approximately 40,000 people. Many of them have not been able return to their homes due to fears of reprisals. In September 2020 UNHCR assisted 43,000 people – including 40,000 displaced and 3,000 among the host community- affected by the crisis with cash and relief items.

Humanitarian agencies are currently visiting the affected areas to assess the situation. Most of the displaced left everything behind, having no time to take any belongings. People need shelter, food and access to medical services. The majority are being hosted by local communities already struggling to cope with limited resources. Others are sleeping in the open.

UNHCR is bringing in emergency supplies including plastic tarpaulins for shelter, mosquito nets, blankets, jerry cans and kitchen sets from the capital, Kinshasa, but the needs are outstripping supplies to help 5,000 families.

More resources are urgently needed to help displaced people in the region. UNHCR has received just 12 per cent of the US$204.8 million needed for our operations in the DRC.