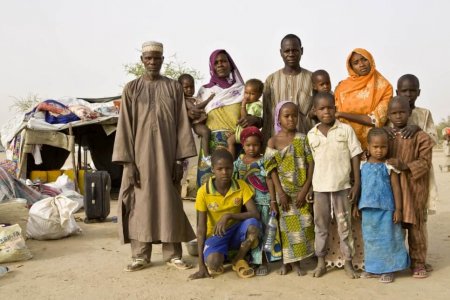 Up to 65,000 Nigerians are on the move following a series of attacks by armed groups on Damasak town, in Borno State. Initial reports indicate that eight people were killed, and a dozen injured.

UN Refugee Agency, is deeply concerned as up to 65,000 Nigerians are on the move following a series of attacks by armed groups on Damasak town, in northeast Nigeria’s restive Borno State. Initial reports indicate that eight people were killed, and a dozen injured.

Following the latest attack on Wednesday 14 April, the third in seven days, up to 80 per cent of the town’s population —which includes the local community and internally displaced people— were forced to flee. Assailants looted and burned down private homes, warehouses of humanitarian agencies, a police station, a clinic and a UNHCR Protection Desk. Those fleeing include Nigerians and Niger nationals living in the area.

While many fled towards Borno State capital city, Maiduguri, and to Geidam town in neighbouring Yobe State, others crossed into Niger’s Diffa region. Our staff and partners in both countries immediately deployed assessment missions to identify the most pressing needs and tailor the response.

Due to insecurity, however, humanitarian access is increasingly challenging in many parts of Nigeria’s Borno State, including for UNHCR staff, who were forced to temporarily relocate out of Damasak this week.

Despite the challenges, we stand ready to assist those newly displaced people we can reach.

Violence in the Lake Chad Basin has uprooted 3.3 million people, including over 300,000 Nigerian refugees and some 2.2 million displaced within North East Nigeria, especially in Adamawa, Borno and Yobe States. More resources will be needed to respond to this new emergency since funding for our Lake Chad Basin operation is already critically low with only 14 per cent of the US$ 128.4 million requested received so far.