Urgent action needed to mitigate the impact of worsening drought in Somalia. 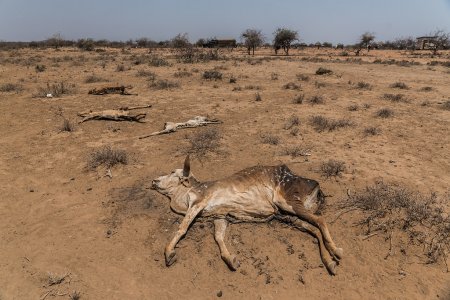 Most parts of the country are facing critical water shortages. We are facing widespread food insecurity, malnutrition, population displacement and disease. We need funding now to save lives.

The Federal Government of Somalia and the humanitarian community are deeply concerned about the worsening drought conditions in Somalia.

Most parts of the country are facing critical water shortages, with more than 50 districts with the moderate to severe drought conditions. The situation is particularly concerning as forecasts indicate a second consecutive season of below-average rainfall during April to June of the season. Current forecasts indicate little to no rainfall for most parts of Somalia through the third week of April. Over 116,000 Somalis have already been displaced by extreme water shortages since October 2020. With worsening drought conditions and limited response, high levels of population displacement are expected in the coming weeks and months.

“Compounding the effects of the various crises in this country, support to people in Somalia this year is needed now more than ever before. I am appealing to international friends to give generously and to give now to fund a rapid drought mitigation response,” said the Minister of Humanitarian Affairs and Disaster Management, H.E. Khadija Diriye. “We are facing widespread food insecurity, malnutrition, population displacement and disease. We need funding now to save lives, alleviate suffering and get assistance out before the situation becomes a complete catastrophe.”

The drought conditions add an additional layer of complexity to already unprecedented needs, driving communities to use unsafe coping mechanisms, at a time when communities are already struggling with the impact of COVID-19, continued desert locust infestation, armed conflict, political instability and widespread food insecurity. The cumulative impact is dire, with the cost of water skyrocketed by 54% in some areas, further exacerbating the vulnerability of women and children who now must walk further distances to collect water.

“I am deeply concerned that we are facing increasing needs with diminishing resources. We can mitigate the impact of drought, but urgent and immediate action is needed now as experience has taught us from the response to the 2016/17 severe drought,” said the Humanitarian Coordinator, Adam Abdelmoula. “The Humanitarian Response Plan (HRP) is currently only 4.1 per cent funded. While humanitarians do everything possible to address the impact of drought, immediate funding to the HRP and sustainable resilience building solutions are needed to manage the cyclical climatic vulnerabilities in the longer term.”