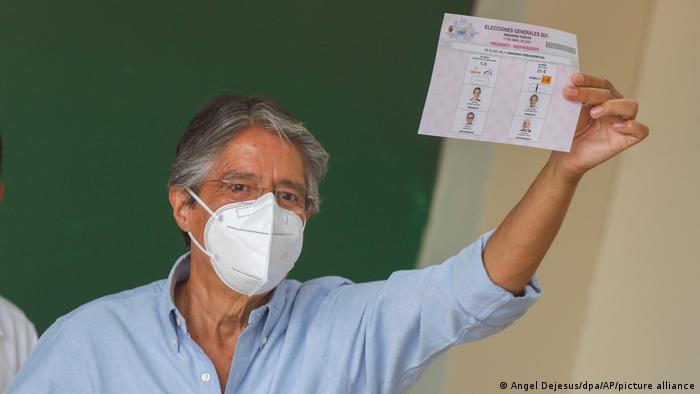 Conservative ex-banker Guillermo Lasso won Ecuador’s presidential runoff on Sunday with 52.5% of the vote, declaring himself president-elect with more than 96% of ballots counted. His opponent, socialist economist Andres Arauz, received 47.4% of the votes and conceded the race.

“It’s a day in which all Ecuadoreans decided their future, they have used their vote to express the need for change and the desire for better days,” Lasso told supporters in a victory speech.

“I congratulate him on his electoral triumph today and I will show him our democratic convictions,” Arauz said in comments conceding the race to Lasso.

Arauz previously declared victory earlier in the day, citing an exit poll that showed him with a 1.6% lead. He won in the first round of the election in February but failed to win enough of the vote to avoid a runoff.

What are the political views of Lasso and Arauz?

Lasso believes in tax cuts to boost the economy, and is also a proponent of measures to reduce public debt. He has previously ran for the presidency two other times.

Arauz believes in raising taxes on the wealthy, and wished to renegotiate Ecuador’s debt with the International Monetary Fund. His mentor is former leftist President Rafael Correa, who is living in exile in Belgium with his wife after receiving an eight-year prison sentence on corruption charges in his home country.

What’s the political situation in Ecuador?

Moreno congratulated Lasso in a tweet and wished him success.

The election comes as Ecuador grapples with the health and economic consequences of the coronavirus pandemic. So far, more than 17,000 Ecuadorians have died of the virus, straining the country’s healthcare system.