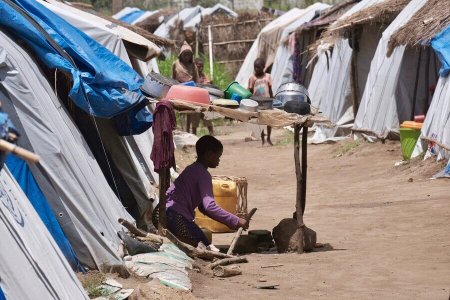 Wednesday 24 March was a sunny day in the town of Palma in the north of Mozambique. Children were playing football with a soft drink can. Even though everything seemed ordinary, people could feel that the atmosphere was not normal. Then rumors spread that the city was going to be attacked.

“I was home, it was around 4 pm,” said Maria, a mother of two who found shelter with her family in a temporary accommodation center in Pemba — having endured the 24-hour ferry ride adown the 400 km coastline from Palma. “I heard gunshots from afar followed by screams. I rushed to the backyard, grabbed my two children, and ran to the bushes.”

The World Food Program (WFP) has been closely working with both internally displaced people and host communities as the conflict has escalated in northern Mozambique. Continued attacks by non-state armed groups have displaced more than 668,000 people, 80,000 of whom — in the insecure Nangade and Macomia districts, and the port town of Moçimboa da Praia — are currently cut off from humanitarian assistance.

The attack on Palma last month left up to 50,000 people, who fled, in need of urgent assistance. WFP estimates up 23,000 people have been left behind.

Domingos, a father of three, was forced to leave everything behind after the attacks. In order to survive, he and his family ran into the bush where they stayed three days hidden without food or water. “The worst part was hearing the gunshots and screams while imagining if we would be attacked next,” he said.

They were able to reach the Afungi peninsula from where later they were evacuated to Pemba by sea, like most people arriving hungry and thirsty. “I am just grateful that I did not lose relatives in the conflict and now we are all safe,” he said.

For Paula, a mother of two, the situation is not as good. Although she and her children were evacuated to Pemba, her husband is still in Afungi waiting to join the family. “I will not be able to rest until he is here with us,” she said.

“This is a humanitarian catastrophe beyond epic proportions,” said Antonella D’Aprile, WFP Representative and Country Director for Mozambique. “People fleeing Palma are completely traumatized by the violence they’ve witnessed in the past few days, and now, more than ever, they need our help. Our priority is saving lives and making sure emergency assistance reaches those who need it most.”

In response to the attacks in Palma, WFP is providing emergency food assistance including fortified, high-energy biscuits and rations of rice, pulses, vegetable oil, canned foods such as sardines and beans, and water for people who’ve arrived by air, sea and even on foot.

However, because of security concerns, WFP has been forced to temporarily suspend flights from Afungi to Pemba. UNHAS will continue providing support to other WFP operations in northern Mozambique.

Despite logistical and security challenges, WFP plans to assist 750,000 people displaced by violence that began in 2017, as well as vulnerable members of the host communities in the provinces of Cabo Delgado, Nampula, Niassa, and Zambézia in the next few months.

WFP requires US$ 10.5 million on a monthly basis to provide assistance and US$ 98 million is required to provide support for the next 12 months.

The sports arena in the center of Pemba, a green peeling cement building is packed with families. They have emergency rations and hot food — on this day a ration of rice chicken and a banana.