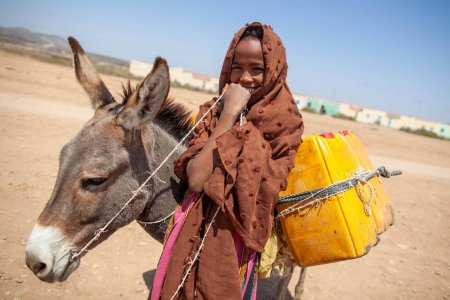 In a historic show of solidarity for a continent that contributes only 5% to global emissions, more than 30 leaders committed to help Africa adapt to climate change and “build forward better”.

Speaking Tuesday, during a virtual Leaders’ Dialogue convened by the African Development Bank, the Global Center on Adaptation(link is external) and the Africa Adaptation Initiative, more than 30 heads of state and global leaders rallied behind the bold new Africa Adaptation Acceleration Program. The program’s objective is to mobilize $25 billion to accelerate climate change adaptation actions across Africa.

President Félix-Antoine Tshisekedi Tshilombo of the Democratic Republic of Congo, and African Union Chairperson, invited his fellow leaders to: “revisit our climate ambitions and accelerate the implementation of our actions planned under our national priorities. To do this we will need to focus on actions to adapt to the impacts of climate change, these include nature-based solutions, energy transition, enhanced transparency framework, technology transfer and climate finance.”

The Africa Adaptation Acceleration Program is built to address the impacts of Covid-19, climate change, and the continent’s worst recession in 25 years. This is why today’s unprecedented show of support for the financing of African adaptation is so significant.

According to Ban Ki-moon, the 8th Secretary-General of the United Nations and the Chair of the Global Center on Adaptation, “The Covid-19 pandemic is eroding recent progress in building climate resilience and leaving countries and communities more vulnerable to future shocks. Africa must make up for lost ground and lost time. Climate change did not stop because of Covid-19, and neither should the urgent task of preparing humanity to live with the multiple effects of a warming planet.”

President Ali Bongo Ondimba of Gabon, and Chair of the African Union-led Africa Adaptation Initiative, spoke of Gabon’s record in emission reductions. He said that Gabon is one of the few countries in the world that is carbon positive. “We have to insist that equal attention be paid to climate adaptation and mitigation in climate finance. Africa calls on the developed nations to shoulder the historic responsibility and to join the program to accelerate the adaptation in Africa,” President Bongo said.

African Development Bank President Dr. Akinwumi A. Adesina said: “With our partners, we intend to mobilize $25 billion in financing for the success of the Africa Adaptation Acceleration Program. It is time for developed countries to meet their promise of providing $100 billion annually for climate finance. And a greater share of this should go to climate adaptation. So far, more than 20 trillion dollars have gone into Covid-19 stimulus packages in developed countries. The International Monetary Fund’s plan to issue $650 billion of new Special Drawing Rights (SDRs) to boost global reserves and liquidity will be enormously helpful to support green growth and climate financing for economic recovery**. **I applaud the leadership of the US government and US Treasury Secretary Janet Yellen, especially, on this big push.”

UN Secretary-General António Guterres said: “African nations are showing leadership…The Africa Adaptation Acceleration Program, and many other ambitious African initiatives, must be empowered to fully deliver on their goals. “

Guterres added: “Universal access to energy in Africa, a priority in the coming years, could be provided primarily through renewable energy. I call for a comprehensive package of support to meet these dual objectives by COP 26. It is achievable, it is necessary, it is overdue, and it is smart.”

Speaking on behalf of US President Joseph R. Biden, US Treasury Secretary Janet Yellen said: “The United States remains a committed development partner for Africa and a huge supporter of the African Development Bank. Africa contributed the least to climate change but is suffering the worst of its effects. I congratulate the African Development Bank and the Global Center for Adaptation for developing the Africa Adaptation Acceleration Program. We support the program… to help ensure that together, we can avoid the worst effects of climate change.”