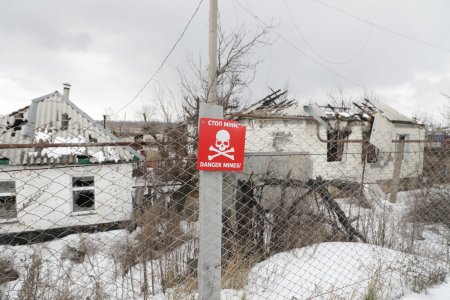 Ukraine ranks fifth in the world for civilian casualties as a result of landmines and ERW, and in top three for antivehicle landmine accidents. That makes the east of Ukraine one of the most mine-contaminated regions in the world.

On International Mine Awareness Day, the Humanitarian Coordinator in Ukraine Ms. Osnat Lubrani calls for the protection and safety of 2 million people in eastern Ukraine who face insecurity due to contamination from landmines and ERW. People there are risking their lives every day to access markets, schools, hospitals and farmland. In 2020, people continued to fall victim to mines and ERW, with at least 70 civilians killed or injured in mine incidents. Since the beginning of the conflict in 2014, over 1,190 mine/ERW casualties have been recorded in Ukraine. In 2020 alone, 55 civilians were injured and 15 killed by mines or ERW. These are, however, only the verified casualties, and the actual number is likely to be much higher.

“It may take a decade to clear the land that has been contaminated in eastern Ukraine.
Landmines and other explosive ordnance will remain a threat to civilians’ physical and socioeconomic well-being for years to come. In the meantime, residents of eastern Ukraine have no choice but to live, cultivate their land and send their children to school in areas littered with landmines,” Ms. Lubrani says. “The Government should continue working towards assuring large-scale humanitarian mine clearance, and the planting of new mines should be avoided at all costs,” Ms. Lubrani adds.

Thanks to donor contributions, humanitarian organizations have been continuously supporting mine clearance operations in eastern Ukraine. In 2020 alone, national and international mine action operators jointly cleared and restored around 5,500 hectares of land, which is almost the size of San Marino or equal to 7,700 football fields.

“Another important task is the setting up of systematic mine victim assistance programs.
Apart from emergency medical help, comprehensive mine victim assistance is not provided in Ukraine,” the Humanitarian Coordinator continues. “I would like to emphasize the importance for the Government of Ukraine to ramp up its efforts to provide mine survivors with high quality functional prostheses, continued medical care, psychosocial assistance, accessible and inclusive services and to ensure that existing laws and policies correspond to the needs of mine survivors,” Ms. Lubrani adds.

“I also call on donors to expand their support to mine action in eastern Ukraine to protect civilians and facilitate recovery efforts, where feasible. Only together can we make sure that eastern Ukraine is free of landmines and ERW,” Ms. Lubrani concluded.

The United Nations General Assembly declared that 4 April of each year to be observed as the International Day for Mine Awareness and Assistance in Mine Action. It is aimed at raising awareness about mines and ERW and facilitating their eradication. Mine Awareness Day is observed to foster the development of national mine-action capacities in the countries where mines and ERW constitute a serious threat to the safety, health and lives of the civilian population.