One in ten Kenyans facing crisis levels of food insecurity. 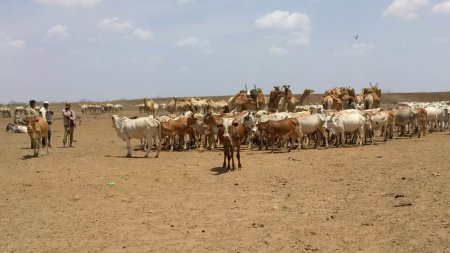 Forecasts suggest another below-average rainy season starting this month. In this event, sharp food security deteriorations beyond the current 1.4 million food-insecure is likely.

These shocking figures should not be considered business as usual. Immediate anticipatory action is required to prevent further deterioration in pockets of severe malnutrition and food insecurity. The underperformance of the October to December short rains meant that pasture availability was poor and crop harvests were below average in many marginal agricultural areas. Livestock diseases are also anticipated to increase if animals are forced to migrate further should the next rainy season fail. Desert locust swarms re-invaded Kenya in December 2020, further impacting farmers and agro-pastoral households. The desert locust infestation has been the worst in 70 years, affecting up to 29 counties during the peak of the crisis.

COVID-19 is also severely impacting the country. As of March 23, 2021, Kenya reported 122,040 COVID19 cases, and WHO statistics show that the current wave is the fastest growing that the country has faced since the beginning of the pandemic. By March 22, 2021, positivity rates increased to 19 percent compared to 2.6 percent in January of the same year. A steep increase in the number of hospital admissions related to COVID-19 has also been witnessed, with a reported increase of 52 percent in 13 days during the second half of March; putting a strain on an already fragile health care system. On top of that, households are facing restricted access to health and nutrition services due to the pandemic, a slowdown in trade, and losses of incomes and livelihoods due to restrictions put in place to control the spread of the virus.

A recent assessment conducted by members of the ASAL Humanitarian Network supported by ACTED,
Oxfam and Concern Worldwide highlighted that drought conditions and lack of rains have placed strain on water assets, water access and livelihoods. As of March 2021, 814 water trucking sites were reported across Turkana, Wajir, Mandera, Marsabit, Garissa, Samburu, Isiolo and Tana River.

Drought puts persistent strain on pastoral livelihoods, undermining household resilience, income and food security, and access to water. Similarly, agricultural activities were also reported to have been adversely affected by drought and desert locust infestations. This is further compounded by the predicted below normal long seasonal rains between March and May 2021 in most of the ASAL counties5 . Kenya is witnessing an increase in the recurrence and severity of climatic shocks, including flooding, droughts and desert locust infestations. Without county authorities allocating resources for preparedness and to address the strengthening of communities’ resilience, these crises will have a devastating impact on the ability of households to respond to future ones.

These compounded crises will thus lead to increased vulnerability of pastoralist and agro-pastoralist communities across the ASAL counties of Kenya. It is imperative that county authorities and the national government invest in preparedness and that early action is initiated to safeguard the livelihoods and food security of hundreds of thousands of vulnerable households. The ASAL Humanitarian Network advocates for the humanitarian donors and agencies to develop contingency planning and mobilize resources for the affected areas of Kenya in support of the local authorities and the Government of Kenya’s efforts.