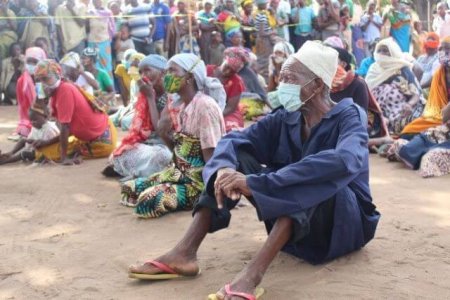 The food insecurity situation in Cabo Delgado has deteriorated due to violence that has disrupted the livelihoods of more than half a million people, who have had to leave behind crops and livestock.

After their house was burned down, Abdul Selemane (44), his wife, two kids and mother fled Mocímboa da Praia, one of the districts most affected by insurgent attacks in the northern province of Cabo Delgado. Leaving behind a farm full of crops, Selemane and his family found shelter in the Marrupa resettlement site in Metuge district, where they have been for four months. In Marrupa, Selemane has received support and been welcomed by the local community that has even provided his family with some land for farming.

“We left because of the war. Our house was burned. The people here gave us some food and land for farming,” he says, hoping for better days after harvesting the crops grown from the seeds he received from FAO, under the emergency program.

The food insecurity situation in Cabo Delgado has deteriorated due to ongoing violence that has disruption the livelihoods of more than half a million people, who have had to leave behind almost all of their possessions, including crops and livestock assets. Selemane and his family are part of a larger number of households that have lost everything and are trying to start over in safer areas. In a country where food insecurity is lurking, engaging in agriculture can help to keep food on the table and reduce vulnerability in the resettlement sites.

The displaced find shelter in resettlement sites and with host families in the districts of Ancuabe, Chiure, Metuge and Montepuez in the south of the province, as well as in the provincial capital, Pemba, including other provinces such as Nampula and Niassa.

Makupe Bahetwe, 41, a community leader in the Ntokota neighborhood of Metuge, is in charge of hosting displaced people newly arrived from conflict-affected areas.

“We receive these people because they are human beings like us. We received them happily and shared our space with them so they can also cultivate because we are an agricultural community,” he explains.

Like other members of the community who are supporting displaced families, Bahetwe received an electronic card, under FAO’s emergency program, through which he had access to beans, groundnut, maize and sesame seeds, in addition to farming tools to help sustain his family of nine.

With the help of his wife on the farm, Bahetwe hopes to improve his family’s nutrition and sell cash crops such as sesame to buy other household needs.

Local authorities in Cabo Delgado estimate that the conflict has resulted in a 30 percent drop in production compared with the previous agricultural season.

According to the Provincial Director of Economic Activities, Haggai Mário, support to restoring livelihoods remains a priority, as 86 percent of the population relies on agriculture.

“The violent actions that are occurring are having a negative impact on the performance of various sectors of the economy and on agriculture in particular, an activity carried out by a majority of the population, who are now at risk of hunger,” said the Provincial Director.

“We are happy because one of the partners that responded positively was FAO, which has been a traditional partner of the Government in the development of agricultural programs,” he said.

In addition to supporting families directly affected by violence, FAO is assisting families that host displaced people to relieve pressure on their resources and food supply.

Between December 2020 and January 2021, FAO reached more than 14 000 families, using electronic cards to provide each family with access to credit to buy cereal and vegetable seeds and farming tools, guaranteeing that affected people can produce their own food and thus reducing their dependency. The emergency programme is funded by the Central Emergency Response Fund (CERF) and the Government of the United Kingdom and Northern Ireland.

The violence has escalated since January 2020 with reports of attacks by non-state armed groups expanding geographically with increased intensity.

Cabo Delgado is now the province with the largest population in Crisis and Emergency levels of high acute food insecurity (Integrated Food Security Phase Classification [IPC] Phases 3 and 4) according to the last IPC. It is estimated that families with high levels of acute food insecurity (IPC Phase 3 or worse) will rise from 0.58 million in December 2020 to 0.77 million in the period April–September 2021.

There are also serious indirect impacts on livelihoods, through disruptions to food supply chains and access to food, basic services and humanitarian assistance.

Communities in less insecure areas of Cabo Delgado, as well as in the neighboring provinces of Nampula and Niassa, have shown incredible solidarity and generosity with displaced people fleeing the crisis. A large number of people who have escaped are staying with family and friends in host communities. However, the situation is putting immense strain on the already meagre resources of these areas.

In recognition of the risk of worsening food insecurity and malnutrition, FAO is intensifying its efforts to support displaced people in accommodation centers by providing agricultural inputs (seeds, tools, etc.) to help them in recovering their livelihoods as well as to host communities as resources become even more limited.