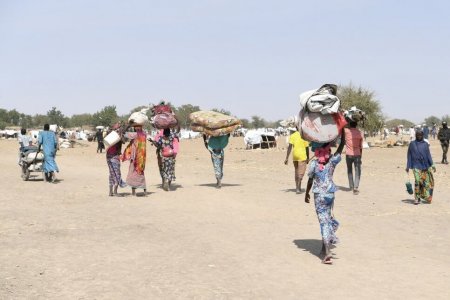 The number of new displacements nearly doubled in 2020 against 2019. More than one million people are now internally displaced. The country also hosts 435,000 refugees from Nigeria and CAR.

Multiple of deadly attacks by non-state armed groups in the Far North region and growing violence in the English-speaking Northwest and Southwest regions continue to trigger massive but underreported displacement in Cameroon.

Most displacement associated with conflict in Cameroon has historically occurred in the Far North, the poorest region of the country and the one that suffers the most from the Boko Haram insurgency. In 2020, however, seven in ten internally displaced people (IDPs) in Cameroon were forced to flee because of violence in the English-speaking regions.

“Since 2017, UN agencies have been warning of a tragedy in the making in Northwest and Southwest regions,” says IDMC director Alexandra Bilak. “Reports of thousands of new displacements since the beginning of the year and school attacks that have left children dead show that this is now a reality.”

Non-state armed groups fighting to secede from the rest of the country have been targeting schools and teachers they say are sponsored by the central government in French-speaking Yaoundé. Entire families are being forced to flee repeatedly to avoid kidnappings and harassment.

“Many IDPs look for a safe haven in Cameroon’s largest cities. But there they face a new set of challenges in accessing services and employment and often end up displaced again as a result of disasters,” explains Alexandra Bilak. In August 2020, the worst coastal flooding in decades rendered nearly 5,000 people homeless in Douala, Cameroon’s economic capital. Last year, floods also swept through the semi-arid Far North region, where they forced people already displaced from conflict areas to move again.

The total number of new displacements in Cameroon nearly doubled in 2020, compared to 2019. Over one million people are now internally displaced. The country also hosts around 435,000 refugees from Nigeria and the Central African Republic. If displacement continues at this rate and goes unreported, humanitarians will not be able to evaluate people’s needs and deliver effective assistance. “Without evidence, you cannot prevent, respond, or find lasting solutions to this neglected crisis”, warns Alexandra Bilak.